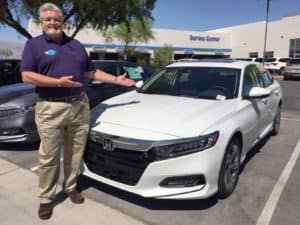 Findlay Honda in the northwest technology specialist Mick Tanner shows off the 2018 Honda Accord EXL at the dealership at 7494 W. Azure Las Vegas 89130.

Honda recently released its 2018 Accord at Findlay Honda in the northwest valley and the Accord model has garnered a lot of attention, according to veteran technology specialist and native Las Vegan Mick Tanner.

Every new Accord comes with Honda sensing which includes: Collison Mitigation Braking System, Road Departure Mitigation System, Adaptive Cruise Control, Lane Keeping Assist System and Traffic Sign Recognition that informs the driver what he speed limit is in a given area.

What’s more when it comes to creature comforts all models come standard with push button start, a multi-angle rearview back up camera, a 7-inch color LCD screen and of course Bluetooth Audio.

The standard powertrain is a 1.5 liter turbo charged four cylinder engine with 192 horsepower and a continuously variable transmission (CVT). The efficient engine and transmission produce impressive fuel economy numbers: an EPA estimated 30 mpg city and 38 mpg highway and a combined average of 33 mpg; and a 2.0 liter four cylinder turbo charged wtih 252 horsepower is still rated to achieve an EPA estimated 22 mpg city and 32 highway mpg and an average of 26 mpg combined. The new model comes with a 10-speed automatic transmission with paddle shifters.

An impressive interior is highlighted by a 450-watt premium audio system with ten speakers with available Car Play/Android Auto. Other key components include ventilated front seats that are also heated and dual zone air conditioning and a larger trunk.

The Accord Hybrid model has a two-motor hybrid system with a CVT with Sport Mode along with Deceleration Selectors. These features combine to make it feel and drive like a regular gas powered model. Although with an EPA estimated 47 mpg for both city and highway drivers definitely save at the pump.

The Accord Touring model includes Heads-Up Display which helps drivers keep their eyes on the road by projecting important driver information including navigation directions, speed, incoming calls and Honda Sensing warnings directly in front of the driver low on the windshield.

“I see lot of baby boomers who like the new Accord,” said Tanner. “It’s a very well-evolved version of the Accord, which is now in its 10th generation.”

The major car critics agree. The 2018 Accord won Car and Drivers award for Best Sedan as well as Kelley Blue Books Best Buy of the Year Award.

Findlay Honda in the northwest is located in the Centennial area at 7492 W. Azure Las Vegas 89130.

The dealership headed by general manager Chuck Loubert is part of Findlay Automotive Group founded in 1961 by the late Pete Findlay. The umbrella now includes 32 dealerships with a 33rd dealership — Mazda — now under construction next to Audi Henderson in the Valley Automall.

Further information can be found by calling 702-982-4200 or by visiting www.findlayhonda.com.