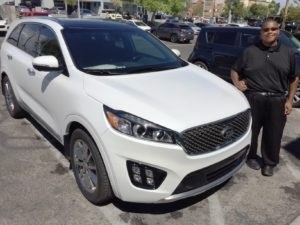 Five models of the 2018 Kia Sorento sport utility vehicle have been added to the inventory of Findlay Kia at 5325 W. Sahara Ave., and they could not have arrived at a better time.

A sleek and sophisticated SUV, the new Kia Sorento has been completely redesigned.  Since its inception in 2002, the Sorento quickly proved to be a serious competitor in the market of mid-size sport utility vehicles. Automotive critics have actually hailed it as the Goldilocks of SUV’s. Not too big or too small, it’s just right.

The models include the L, LX, EX, SX and SX Limited.

Sales consultant Darnell Ray said the new Sorento was on the lot for only a week before he sold three of the models. Two SX Limited’s and one L model.

“It does everything right,” said the 24 year-old Ray, a native of Denver, Colo. “The biggest thing about the Sorento is the amount of technology and sophistication for a crossover priced far less than its luxury competition. Some of the highlights available on certain trim levels include: autonomous auto braking, Smart Cruise Control, genuine Nappa leather, panoramic sun roof, surround view camera, ventilated seats, Android Auto, Apple Car Play and available third-row seating.”

Findlay Kia general manager Byron Klemaske praised the 2018 Sorento models adding “Whether you’re looking for a model with great fuel economy, the sportiness of a turbo or the refinement of a luxury SUV, the Sorento is the model for you.”

“In a few months, we will also have the Kia Stinger GT, Kia’s first performance vehicle,” Ray explained.  “It has an available 365 horsepower twin-turbo V-6.  We’re expecting that the Stinger GT will really attract the performance-minded buyers that are coming out of Audi S4 and the BMW 340i models.”