2019 Acura RDX from Findlay is first in its class 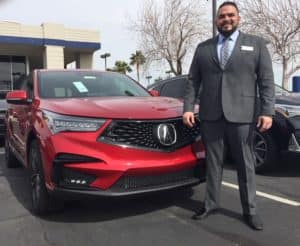 Findlay Acura has unleashed the 2019 Acura RDX Sport Utility Vehicle, which is so popular that it’s the No. 1 selling vehicle in its class, according to AutomotiveWorld.com.

According to sales manager Tino Villalobos the reason for the sudden success of the new RDX is based on several factors.

“The technology combined with the fact that it has the highest safety rating possible from the IIHS (Insurance Institute for Highway Safety) is very strong,” explained Villalobos, “The vehicle has a sleek look inside and out. It has the largest oversized panoramic sun roof in its class.”

The 2019 Acura RDX Sport Utility Vehicle is available with a 2.4 turbo four cylinder putting out 272 horsepower and 280 lb-ft of torque while also getting an average combined 22 city and 27 highway, according to www.fueleconomy.gov.

In addition, the Acura RDX comes standard with a 10-speed transmission, Apple CarPlay for phone connections, touch pad interface, the No. 1 cargo space in its class, among other features.

“It simply stands out in the crowd,” explained Villalobos. “Being in the car business and to still be wowed is an awesome feeling. The Acura product is something else.”

According to Villalobos, the buyer profile is diverse.

“The RDX is attracting everything from school teacher and doctors,” he explained. “Acura did its job with this one.”

Also key for the RDX is that it can come with Super Handling All-Wheel Drive,” explained Villalobos. “In country that is so diverse, that’s a huge feature. You can take it anywhere and feel comfortable.

“The car looks good on the lot, but it looks even better on your driveway,” he added.”

Findlay Acura is headed by general manager Kevin Hicks. The dealership is situated at 315 Auto Mall Dr. in the Valley Automall. Visit in person or online at www.FindlayAcura.com

Further information regarding Findlay Automotive Group can be found at www.findlayauto.com or by calling 702-982-4100.