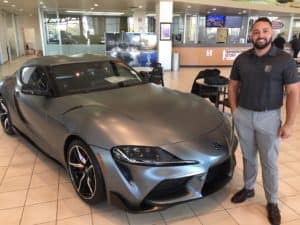 A revamped version of the Supra that was originally introduced in 1978 was reborn in 2020.

Technology and performance have changed a lot since 1978 and the new Supra is a testament to what modern sports cars have become.

“Toyota stepped away from the 2002 Supra for a hiatus to study the need for an all-new version,” said Estrella, adding “when Toyota sets its mind to something, there is no turning them back.”

Estrella, 28, a native Las Vegan, said the entire vehicle changed, but still stuck to its roots in many cases.

“For instance, it remains a rear-wheel-drive vehicle while keeping an in-line six-cylinder engine,” he said.

“You can sit on the pedal and you’ll be thrown back in your seat,” said Estrella.

Other nuances of the 2020 version include available 12 speaker JBL sound system, and full-color heads-up display.

“We have already sold six or seven of the 20-20 version Supras,” Estrella explained. “Toyota is making a limited supply of the vehicle.

Toyota is showcasing the many traits of the Supra.

“I have driven the new Supra a couple of times and I was impressed,” Estrella said. “Every new Supra comes with a year’s membership to National Sport Association along with a free track day. It has a very stout engine that goes perfectly with special challenges.

“Toyota has always been known for reliable and safe vehicles,” Estrella said. “It’s also very cool to have the sports car element back in the Toyota line-up.”

The dealership is headed by general manager John Barr. Further information is available at 702-566-2000.