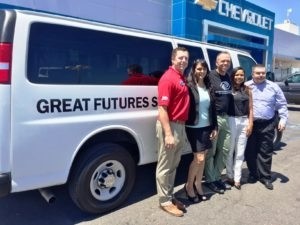 A 2016 Chevrolet 15-passenger van was donated to the Boys & Girls Club of Southern Nevada by Signature Real Estate Group and Citywide Home Loans who raised the funds for the purchase of the van from Findlay Chevrolet. The backpacks and other supplies were collected from residents of Las Vegas. Findlay Chevrolet was the drop off point and hosted a two-hour live radio event with the Mix 94.1 on Friday.  The dealership is located at I-215 between Jones and Rainbow boulevards.

When asked how the event came to be Findlay Chevrolet general manager Doug Fleming said “A few friends from Leadership Las Vegas (a wing of the Metro Chamber of Commerce) suggested that they wanted to make a difference in our community,”

Bhalla approached Leavitt about the possibility of working together to provide a van for the Boys and Girls Club of Southern Nevada.  That vision became a reality and the 2016 Chevrolet 15-passenger van can now be used to transport young people to and from 14 Boys & Girls Club locations in Southern Nevada.

Bhalla led the charge by rallying Signature Real Estate Group agents and others to pitch in and raise the money for the van. Donors were given plaques as recognition for their contributions.

Brandon Roberts, Owner and Corporate Broker at Signature Real Estate Group, added “We pride ourselves on having an office culture in taking care of the community in which we live.”

The special promotion concluded on Friday at Findlay Chevrolet when the school supplies and the van were donated. The end result was a heartwarming and very effective promotional effort that assisted hundreds of Clark County School District students who were faced with the reality of starting the 2017-2018 school years without the necessary tools.

Another key participant in the drive to secure the van was Shelly Panzarella, a branch manager of Citywide Home Loans. “This was beyond our expectations,” she said.

Bischel said the van would be a great help for the Boys & Girls Clubs.  “We really need multiple vans to get more kids to and from school,’ he explained. “It will also be used for field trips.” She added that “The children in our neighborhoods desperately need supplies.”

In both car sales and real estate, networking is considered a key to success. In this case the same principle of networking has blessed the lives of the local youth.

Fleming also said the backpacks, supplies and the van that was donated are evidence that Las Vegas is a caring community.  “It’s stunning how many of our young people simply don’t have the tools necessary for being successful in school,” said Fleming.

All parties involved said they look forward to continuing the promotion in the future.