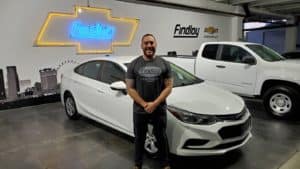 A native of Chicago, the 30-year-old educator won the new Chevrolet Cruze just in time, as evidenced by the fact that his 2003 Ford Mustang was on its last leg.

“I woke up this morning and still couldn’t believe what I had won,” said Winiewicz, who teaches art to first through fifth-grade students at Walter Long Elementary in northeast Las Vegas. “The biggest drawback I had was the transmission. Also the air conditioning just went out a couple of days ago. The timing was perfect, considering that summer is just around the corner. Plus the turn signals weren’t working either.”

Among the features in the 2018 Cruze is traction control, Bluetooth, WiFi hotspot, On Star, Rearview camera, daytime running lights and a four-cylinder turbo power plant that generates an EPA estimated 27 mpg in the city and 40 on the highway.

“I’m not used to getting excellent gas mileage,” Winiewicz said. “The Cruze will save me a lot of money.”

“In addition, it’s a 40-minute drive from my house to Walter Long Elementary. It was very expensive considering the gas mileage that I was getting in the old Ford Mustang.”

“What a nice guy,” said Winiewicz of Fleming. “I usually don’t like going to a car dealership, but Findlay Chevrolet is different. Doug gave me autographed hockey pucks and T-shirts, along with bottle openers and key chains.

“He really hooked us up.”

Fleming praised Winiewicz for his dedication to education.

“Greg is a wonderful young man who puts his heart and soul into the students and our community’s future!” said Fleming.  “We are so proud to be partnered with Silver State Schools Credit Union for our annual teacher car give away.

“Since 1961 Findlay Automotive Group has built our business and reputation by putting people and our community first!”

Situated at 6800 S. Torrey Pines Dr., in the southwest valley, Findlay Chevrolet is part of Findlay Automotive Group founded in 1961 by the late Pete Findlay. The umbrella consists of 33 dealerships in Nevada, Utah, Arizona, Idaho, Oregon and California.