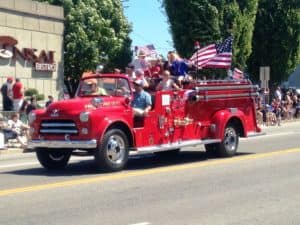 The 1956 Dodge Findlay Family fire truck has become a very popular addition to community events. Shown above in Idaho, the fire truck is now housed at Findlay Cadillac in the Valley Automall.

The story of the fire truck is a fascinating bit of the family history, which actually started when Pete Findlay traveled to Detroit to pick up the vehicle and deliver it to Salt Lake City-based L.N. Curtis and Sons for conversion to a fire truck.

Once the conversion was completed, Findlay picked it up and drove it back to his home of Panaca, Nev., where he was a member of the Lincoln County Fire Department.

However, after many years of usage, the truck fell into disarray after being stored outside in an alfalfa field in Panaca, where the conditions during the winter include snow and temperatures in the teens. Once Findlay’s son, Cliff, heard that the truck needed to be rehabilitated, he purchased it and sent it to Findlay Customs, which is next door to Findlay Toyota in the Valley Automall.

As evidenced by the expertise of Findlay Customs in the past, the fire truck was totally restored with fire engine red paint to an impressive sound system, and rebuilt the engine, the transmission, the brakes and the driveline in a frame-up restoration, to name a few.

The entire restoration took about one year to complete.

Now used in parades, the truck was first showcased at a parade in Coeur d’ Alene, Idaho.

That same kind of schedule for the truck has been followed in Southern Nevada, where it has been featured at various community events such as the Summerlin Fourth of July and Christmas parades.

“We have people come in to see the fire truck all day long,” said Bill Young, now the parts and service director at Findlay Cadillac who has been with Findlay Cadillac for 14 years and has been in the car business for 50 years. “There is a real allure to the vehicle which had an original sale price of $4,500.”

Cliff Findlay has fond memories of the fire truck.

“Pete Findlay would be proud to see the fire truck now,” Cliff Findlay once said. “It runs great. This thing is unbelievable.”

Findlay Cadillac general manager John Saksa the fire truck is a magnet for the dealership.

“We’re amazed at how many people come into the dealership just to see the fire truck,” he said. “It’s very impressive and people are fascinated by it whether it’s in our showroom or in a parade.”

Findlay Cadillac is situated at 993 Auto Show Dr., in the Valley Auto Mall. The dealership is part of Findlay Automotive Group founded by Pete Findlay in 1961 and now includes 31 automobile dealerships in Nevada, Utah, Arizona, Idaho and Oregon.

Further information regarding usage of the fire truck can be found by calling Young at 702-430-4305.

Further information regarding the dealership can be found by calling 702-558-2600 or by visiting www.findlaycadillac.com.