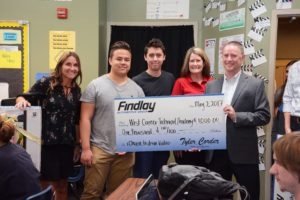 Another winner in iChoose to Drive was the awareness that White and Temple brought to the forefront with their community service spot addressing the dangers of using cellular phones while driving a vehicle. The 30-second awareness spot entitled “Numbers” was created and produced by White and Temple.

The combined promotion sponsored by Findlay Automotive Group and Cox Media has grown dramatically, as evidenced by the fact that over 70 videos were produced and entered in the competition by Clark County high school students. That’s about twice the number from the previous year.

Cox Media will air “Numbers” on Cox cable networks through June. The promotion was open to students ages 13-18. Students were encouraged to create a 30-second public service announcement (PSA) video message about the dangers of distracted driving.

The winning work by White and Temple drew wide praise from many people including fellow students, parents, school administrators and Findlay Automotive Group CFO Tyler Corder. The boys plan to use their $1,000 prize to purchase new video equipment.

The concept was White’s idea, while Temple was the videographer.

“I thought about the idea specifically for this contest,” said White, who wants to be a director. “Sean and I have been working together since our freshman year. We just needed a couple of willing volunteers. It took us about three days to put everything together.”

White said he has been looking to several schools after high school.

“I actually got a letter from New York Film Academy,” he said. “I assume they knew I was in the video production program at West Tech. I am telling everyone who will listen.”

Temple added, “It’s been a very cool experience. I want to go to college and go into the field of business. I am very passionate about filming and want to concentrate more on movies.

“This is definitely something that I will never forget.”

Temple’s father, Bradley, said he was proud of both boys.

“We are so happy about what they achieved; and it will help them for the future when applying for college,” he said. “In addition, this PSA will also spur people to think twice before picking up the phone when they’re driving. We are very proud of what they achieved.”

Sweikert, the video production teacher at West Career and Technical Academy, said she was proud of the boys, who led the school to its second straight victory in the contest.

“They worked very hard to put together a nice video,” said Sweikert, a native Las Vegan and a graduate of both UNR and UNLV who has been teaching video productions for 10 years. “I’m really proud of them.”

“The iChoose to Drive program has gained a lot of momentum over the past few years,” Corder said. “This year we had more video entries and more people voting on the videos more than ever before. I’m really impressed with the quality of the videos these teenagers put together. Their creativity and video production skills are amazing. Hopefully, the program resonates with young people and we can save some lives by focusing on eliminating distractive driving.”

0 comment(s) so far on Findlay and Cox award $2,000 to high school students for safe driving video.