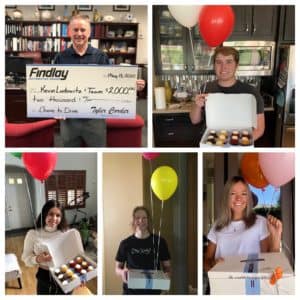 Each year Clark County High School students create 30 second commercials about the dangers of distracted driving. It’s part of the iChoose to Drive competition sponsored by Findlay Automotive Group and Cox Media. This is the seventh year of the contest and Findlay Automotive awarded the winning team with $2,000.

The winning team from Palo Verde High School created a commercial entitled Notification Interference. There were more than 70 entries into the contest and thousands of votes cast. The team was comprised of four students, Camden Villasenor, Mackenzie Bledneck and Gaby Floratos.

In addition to rewarding the students their teacher, Vicki Steffenhagen received a 55 inch 4K smart TV.

Tyler Corder CFO of Findlay Automotive had this to say about the competition. “This is the seventh year we have sponsored iChoose to Drive and the first time we surprised the winners virtually. While we would have liked to have congratulated the students in person, we had to go the ‘social distance’ to provide them the recognition they deserve.”

The way the public consumes video content has changed a lot in recent years and continues to evolve. The students who complete in this contest get real world experience with how to share an important message in a compelling engaging way.

“Video Production is a three-year Career and Technical Education (CTE) Program of Study in Clark County School District, so this last year is for students to work independently on pet projects and contests,” said teacher Vicki Steffenhagen.  “It’s been a pleasure having these kids. They are hard-working, creative, and dedicated. This PSA contest is such a fun way to end the year and recognize their hard work.”

Team leader Kevin Ludowitz and team member Camden Villasenor have known each other since elementary school at Ober Elementary in Summerlin and reconnected while in Steffenhagen’s video production class as freshmen. Both plan to attend UNLV and study film.

“Kevin had the idea last year for the video, but we ran into some challenges trying to record it, including weather,” said Villasenor.  “We saved the idea and it all came together this year.”

According to Ludowitz, the extra year also gave the team the time to enhance their video and editing skills.

“Another year of learning in our video production class really helped us improve our skills and gain new ones, including learning motion tracking which we incorporated into our entry,” said Ludowitz.

According to National Highway Traffic Safety Administration (NHTSA) 2017 data, 9 percent of teen’s age 15 to 19 who were killed in a crash were distraction affected.  In Nevada, it is illegal to talk or text on a handheld cell phone or similar device while driving. Illustrating the dangers of distracted driving is one of the NHTSA’s central purposes.