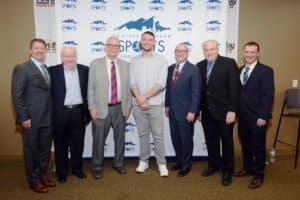 The Southern Nevada Sports Hall of Fame announced what has been billed the most diverse group in its 22-year history at Findlay Toyota.

The six nominees will be inducted during ceremonies May 11 at the Orleans Arena.

Started in 1997 with the honoring of former Bishop Gorman and NFL quarterback David Humm, the Southern Nevada Sports Hall of Fame was kick-started by the combined effort of Findlay Toyota executives Rich Abajian, Don Richardson, who together wanted to honor Humm for his many accomplishments.

Now with a total of 104 members, the group has not only gained attention for its inductees, but also for numerous scholarships that help young people reach their goals.

With its long history, the Southern Nevada Sports Hall of Fame has continued a journey that has not only honored Southern Nevada’s top names in athletics, but given youth a chance at the same time. Now housed on the second floor of Findlay Toyota in the Valley Automall, the hall honors inductees in many sports both individuals and entire teams.

The latest group of inductees has interesting ties to current and past history.

For one, the Las Vegas Thunder’s entry into the market place helped bring to light the popularity of ice hockey in 1993 when the father and son team of Hank and Ken Stickney brought the International Hockey League Expansion team to the city some 25 years before the emergence of the Vegas Golden Knights, now one of the top National Hockey League teams playing in front of packed houses at T-Mobile Arena.

The idea of having hockey in the desert had many scratching their heads in the old days, but the move was brilliant considering how the Vegas Golden Knights are certain to become a member of the Hall of Fame sometime in the future, too.

Yet another interesting story is that Ralenkotter played against fellow Hall of Fame inductee Cliff Findlay, when Ralenkotter was a guard on the Bishop Gorman basketball team and Findlay was a center on the Western High School in the 1960s.

Remembering yesteryear has been huge each year as former athletes and other sports-related people have been honored and/or taken notice of what the hall has accomplished in bringing 104 members to the group since 1997.

Evidence of the success is especially noteworthy in the latest group that includes Bernstein, considered the Voice of Boxing with an impressive list of accomplishments including 35 years of broadcasting. His career is so respected that he received the highest honor in boxing by being inducted into the International Boxing Hall of Fame. He is one of only a few broadcasters to be honored.

“I have attended the Hall of Fame before, but this time I’m being inducted,” said Bernstein, who was a journalist and managing editor at Lerner Newspapers in Chicago from 1974-79 and won the Chicago Newspaper Guild’s award for best story. “I’m truly honored.”

In addition, Bernstein has served on the Board of Directors of The Caring Place, a Las Vegas facility that was co-founded by his wife, Connie, which provides free services for those impacted by cancer.

“The class of 2018 is accomplished in so many ways,” said Hall of Fame Executive Director Jim Lambright. “We have outstanding athletes in their sport in Armon Gilliam and Forrest Griffin, a successful mentor in Jim Reitz, a leader in sports broadcasting in Al Bernstein, a community and business leader in Rossi Ralenkotter and one of the foundational franchises in the Las Vegas Thunder. We are honored to bestow upon them the state’s highest sports recognition by welcoming them to the Southern Nevada Sports Hall of Fame.”