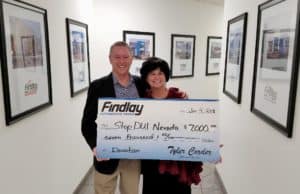 Stop DUI Nevada, which was founded by Sandy Heverly after several members of her family were the victims of a drunk driver.

The victims of the horrific crash included Heverly’s mother, husband and four children who were all very seriously injured in the collision in Las Vegas in the early 1980s. The crash ultimately led to the untimely death of her mother.

The offender in the accident was under age, had two prior DUI’s, a suspended license and was speeding, ran a stop sign and left the scene of the collision. He received a $100 fine for his crimes after leaving the scene of a crash.

“Every day you hear of lives lost in car wrecks in Southern Nevada,” said Findlay Automotive Group CFO Tyler Corder. “Stop DUI focuses solely on trying to save lives by eliminating impaired driving which is the cause of so many of these fatalities. We’re proud to support Stop DUI.”

Now the executive director and co-founder of Stop DUI, Heverly has led the charge to halt DUI-related crashes. She tells first-hand the devastation of DUI victims, and created the first DUI Victim Impact Panel concept in the nation.

In addition, Heverly has received numerous local, state and national awards for her grassroots activism including the “Clark County Humanitarian Award,” the STOP DUI “Caring Enough to Make a Difference Award,” the United States Congressional Recognition Award for Meritorious Service Award and the Clark County School District Office of Substance Abuse Education and Prevention Award. She was selected by the President’s Cabinet from among 200 individuals from around the nation to receive the award which is the most prestigious in the victim rights arena, to name a few.

“This donation came at the perfect time because our cupboard was empty,” Heverly said. “It was an incredible blessing. I couldn’t believe it was happening and we’re very thankful.”

STOP DUI is also planning to utilize a portion of the funds to sponsor and/or assist the Nevada Highway Patrol with additional Field Sobriety Testing training classes.

“In addition, Stop DUI will provide innocent DUI victims advocacy services at no cost and assist as much as possible with their immediate financial expenses,” Heverly added.

More information about Stop DUI Nevada can be found at www.stopdui.org.

Findlay Automotive Group was founded in 1961 by the late Pete Findlay whose son Cliff now oversees operations of 32 dealerships in Nevada, Arizona, Utah, Idaho and Oregon. More information can be found by visiting www.FindlayAuto.com.