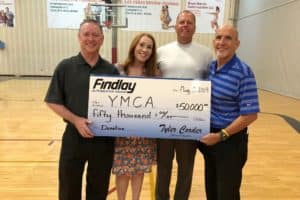 The YMCA has been involved in Las Vegas since 1944. From left, Findlay Automotive Group CFO Tyler Corder, who provided a donation of $50,000 to the Y, Emily Sawyers, Mike Lubbe, and YMCA Development Director Chuck Searle of the YMCA of Southern Nevada.

Findlay Automotive Group is a big supporter of the YMCA, which is the one of the nation’s leading non-profits. The Y has been involved in Las Vegas since 1944.

In 1980, Southern Nevadans celebrated the opening of the 73,000 square-foot Meadows YMCA at 4141 Meadows Lane, which was later rededicated as the Bill & Lillie Heinrich YMCA in just one of the many additions that have been conducted over the years.

Also very impressive is the fact that the Y is accessible to all. Financial assistance is offered to individuals and families who cannot afford membership. The Y is guided by four core values: carrying, honesty, respect and responsibility.

“We’re especially proud that our Findlay Chevrolet General Manager Doug Fleming gives of his time by serving on the board of the YMCA.”

“I love working for an organization that has built their business by being involved in the community! Fleming said. “Donating to the YMCA is excellent because they serve so many. They have programs like Summer Camp for the youth; health and fitness programs for seniors and special memberships for military families, too.

“It’s special when two long-term community partners with deep roots continue to shape the future. Findlay Automotive has been operating in Las Vegas since 1961 and the YMCA since 1944.

A big key to the success of the YMCA is its continued work in Southern Nevada. When families struggled through the side effects of unemployment during the recession, the Y responded with Back on Track, an unprecedented program that provided free six-month memberships to unemployed individuals and their families. In fact, more than 3,100 community members benefited from the free service valued at more than $335,000.

“We value the partnership with Findlay Automotive. We cannot be successful without the support of companies like Findlay Automotive Group,” said Mike Lubbe, a native of the Midwest who is president and CEO of the YMCA. “Rarely does anyone come here and not want to be here.”

Also impressive is that there are now four Y’s in Southern Nevada.

Findlay Automotive Group was founded in 1961 by the late Pete Findlay. Since its entry into the automobile business, the group has grown to include 32 dealerships in Nevada, Utah, Oregon, California and Arizona.