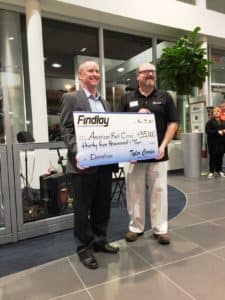 Findlay Automotive Group recently gave a check for $35,000 to the American Red Cross, Southern Nevada Chapter executive director Scott Emerson during ceremonies for the grand opening at Subaru of Las Vegas in the southwest valley.

The donation was the single-largest ever given by the automotive giant that has been based in Southern Nevada since 1961.

“Findlay doesn’t just talk the talk. They walk the walk, too.” Emerson said.

Findlay’s long-standing commitment to the community has been evident since the company’s creation.  Company founder Pete Findlay insisted that the practice be a part of the company business model.

Emerson said The American Red Cross has been in Southern Nevada for 100 years.

“We celebrated 100 years in Las Vegas,” Emerson added. “We are the longest-running charity in Southern Nevada and Findlay Automotive Group understands that the American Red Cross is important to having a strong community.”

Unfortunately, home fires in Southern Nevada are a common occurrence.

“We go to a home fire to help the residents every 18 hours,” Emerson said. “That’s more than one a day and many of the people who are affected are first-generation. Many don’t have friends or family, so it’s up to us to help get them back on their feet.”

“When a home fire occurs, the displaced residents oftentimes can’t even talk when we arrive. It’s an awful experience to suddenly not have somewhere to go at the end of the day. Findlay understands that a strong American Red Cross is important to having a strong community.”

The long-term importance of the American Red Cross was measured by the tragic “1 October” shooting that left 58 killed and hundreds wounded.

“We needn’t look any further than what happened in Las Vegas Oct. 1,” explained Emerson, a native of Missouri who has been in Las Vegas for about 12 years. “If people had not supported us in the past, we may not have been there when we were needed so badly. The money donated by Findlay Automotive Group will go to ensure that we will continue our legacy of serving the community so that we will be able to help people 100 years from now.”

“What the Findlay people do for this community is altruistic. Not only do they contribute dollars, but they help raise the profile of organizations for a multiplier effect.”

Findlay Automotive Group CFO Tyler Corder is the chairman of the board for the American Red Cross in Southern Nevada.

“The Red Cross response to the 1 October shooting was tremendous.” Corder said. “They immediately supplied 450 units of blood to local hospitals which was instrumental in saving lives. The day after the shooting the Red Cross mass casualty unit arrived in Las Vegas and was instrumental in organizing the Family Assistance Center and also began providing mental health and spiritual counseling to those affected by the tragedy. In times of crisis the Red Cross always is there to help. We are very proud to support the efforts of the American Red Cross.”