Findlay Automotive has record year in 2017 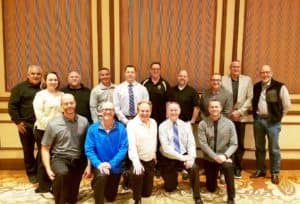 Findlay Automotive Group mounted record sales in 2017. Shown above is the Las Vegas contingent of the company’s management personnel.

Since Pete Findlay opened his first dealership on Boulder Highway in 1961, Findlay Automotive Group has blossomed in growth.

According to those who should know, the continued growth is the result of a continued dedication to the community. The Findlay name can now be seen in a total of 32 automobile dealerships in Nevada, Utah, Arizona, Idaho and Oregon.

No matter what the economy, Findlay Automotive Group dealerships have maintained a steady commitment to the community. Even when the economy crashed in 2008, Findlay dealerships kept pace by continuing their involvement in community events such as youth and college sports programs, along with countless charities and causes.

In Southern Nevada, the participation is spearheaded by long-time Findlay Automotive Group CFO Tyler Corder, who oversees the continued drive to keep dealerships involved in every conceivable facet ranging from athletics to the Smith Center, a sparkling entertainment center opened in Symphony Park in downtown Las Vegas in 2012.

“We’re very happy to continue the growth of Findlay Automotive,” Corder said. “In 2017 we grew through the purchase of four new dealerships in Prescott, Arizona. Already, in 2018 we’ve added Findlay Volvo Cars Las Vegas and we’ve also started construction on a new Audi dealership in Modesto, California. It’s exciting to continue to grow and to provide advancement opportunities to our employees.”

“We just finished our most successful year ever,” Corder said. “In 2017 we sold more than 43,000 vehicles. Nationally car sales were flat in 2017 compared to the prior year. However, we’re very proud that we were able to sell nearly 8% more vehicles than the prior year. I think it speaks to the fact that we have a tremendous team of employees that are dedicated to providing great service to our customers.”

Among the many Findlay dealerships currently in the midst of expanding or moving is Jaguar Land Rover Las Vegas. The dealership, situated at 5255 W. Sahara Ave., will be moving into a new location near the I-215 and Jones in the southwest valley.

“Findlay Automotive is a great place to work,” said Jaguar Land Rover Las Vegas general manager Ray DiNardi, who has been with the company for almost 30 years. “When I started, we only had Findlay Oldsmobile and now we have 32 dealerships in five states – and we’re still growing.”

“It couldn’t be better,” said DiNardi, who will open the new store in November. “I cannot imagine working anywhere else.”

Findlay Chevrolet GM Doug Fleming, a Las Vegas native and 17-year employee with Findlay Automotive, said the success is based on the company’s commitment to employees and the community.

“Being locally-owned and operated in a booming city with so many brands to offer is a huge opportunity,” said Fleming, a UNLV graduate who is among a group of long-time employees. “Our employees take great pride in being a member of the group. People make the difference!”

Jamaal McCoy, who joined Findlay Automotive Group in January of 2002, is now the market area manager of several Findlay stores in the Arizona cities of Prescott and Bullhead City.

“I think they just do business the right way, and that’s taking care of employees and customers while also getting involved in their communities” explained the 41 year-old McCoy.

Findlay Automotive Group’s involvement in the community was recognized in November when it was honored as the Outstanding Corporation at the 26th annual National Philanthropy Day Celebration in the Grand Ballroom of the Westgate Hotel.