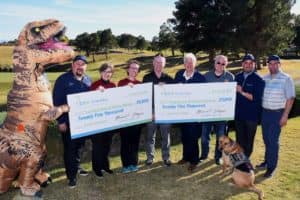 Findlay Automotive Group and Cox Communications have a long-standing partnership that has helped countless charities in Southern Nevada.

For the past six years, Findlay Automotive Group has been the presenting sponsor of the annual Cox Charities Golf Tournament, held on October 28 at TPC Summerlin and attracting a field of 126 golfers.

The proceeds from the 2019 tournament benefitted the Las Vegas Natural History Museum and Helping Our Brothers and Sisters. A total of $50,000 was donated to the two charities.

Helping Our Brothers and Sisters, headed by Marvin Carter Ph.D., the executive director.

“We were surprised that we got selected as a beneficiary of the event,’ said Carter, originally from North Carolina who has lived in Las Vegas for the past six years. “The event is very nice and the people are also very nice.”

Carter explained the funds from the event will be used to help combat veterans including those suffering from Post-Traumatic Stress Disorder and Traumatic Brain Injuries.

“This will really get our language immersion program going,” said Carter. “The people who have challenges are usually those who don’t have any support. Some people transition and some don’t.”

Carter added that the group’s oldest combat veteran is now 103 years old.  Carter went into the Marines in 1972 and got out in 1985.

“The veterans are now getting better help,” he said. “The VA has continually improved.”

The Las Vegas Natural History Museum will use its $25,000 donation to enhance its hands-on youth exhibits including the Cox Charities Young Scientist’s Center and the addition of a new “Draw Alive” interactive program that animates children’s dinosaur artwork for display on a large video screen.

Cox Charities is an employee funded and managed workplace giving program funded in 2007. Over the past 12 years, Cox Charities has awarded more than $2 million in charitable grants to over 100 diverse nonprofit organizations /agencies in Southern Nevada.

Findlay Automotive Group CFO Tyler Corder lauded Cox Charities and its many employees who work throughout the year to benefit the many charities.

“Cox is a tremendous community partner and Findlay Automotive is proud to support their charity event,” Corder said. “We’ve been the presenting sponsor of the Cox Charities golf tournament for several years. Over that time the event has raised more than $500,000 to distribute to local charities.”

Findlay Automotive Group was founded in 1961 by the late Pete Findlay and now includes 32 dealerships in Nevada, Arizona, Utah, Oregon, Idaho, and California.