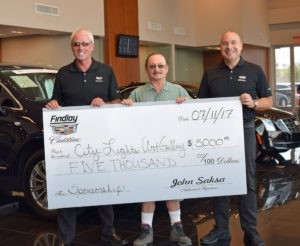 Findlay Cadillac recently donated $5,000 to the City Lights Artists Co-Op an organization that provides scholarships to local high school seniors who want to pursue a college degree in art.

In addition to providing scholarships City Lights Artists Co-Op President Tommy Tucker operates an art gallery. Tucker said the funds donated would be dispersed in five $1,000 increments to five students over the next few years.

“This is the largest donation the gallery has ever received,” said Tucker, who opened the location in 2003. “It’s a huge shot in the arm and we appreciate it big-time.”       Tucker explained that Pat Wall, a member of the City Lights Artists Coop was instrumental in securing the donation. He added that scholarships have been granted during each of the past four years.”

Tucker said the gallery and the city of Henderson work well together.

“The City of Henderson loves the work we do,” Tucker added. “Whenever there is a special occasion such as Mothers Day, we work very closely with the city so that we can help those students who want to eventually study art.”

Tucker added that the gallery has already agreed to team with Findlay Fiat for a promotion called Art Train on the Friends of the Nevada Southern Railway Sept. 30. The popular railway runs north from downtown Boulder City to Railroad Pass and back.

Tucker also said there will be 20 pieces of art at the train station and another 80 pieces on the train.”

The next promotion will raise funds for City Lights Artist Co-Op.

“The artwork will be hung inside the train,” Tucker explained, “and all of the funds from the sale will be donated to the gallery. We will also have raffle tickets with the winner receiving a new Fiat from Findlay Fiat.”

Both Findlay Fiat and Findlay Cadillac are spearheaded by general manager John Saksa, who praised the gallery for its dedication to local youth. Tucker said several members of the board also drive vehicles from the Findlay Automotive Group of dealerships.

“Tommy and his staff work hard to give young people a huge break, and we’re proud to be a part of the program,” Saksa said. “This particular scholarship could very well be the deciding factor in a graduating senior being able to go to college to study art.”

Saksa said the addition of Fiat to the promotion of City Lights Artist Co-Op was perfect.

“The Fiat is a very popular vehicle for young people, especially those who are attending school,” Saksa explained. “It’s a fun car to drive and just as important is the fact that Fiat models get incredible fuel mileage.

“We see this as a long working relationship and look forward to being a part of it for years to come.”

The gallery is situated at 3 E. Army Street in Henderson. Further information can be found by calling 702-260-0300.

Findlay Cadillac is situated at 993 Auto Show Dr. in the Valley Automall. The dealership is part of Findlay Automotive Group founded in 1961 by the late Pete Findlay, whose son, Cliff, now oversees 31 dealerships in Nevada, Arizona, Idaho, Oregon and Utah.