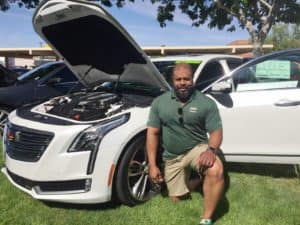 On a pleasant Saturday afternoon at Veteran’s Memorial Park in Boulder City, the annual Boulder City Spring Jamboree dominates the grounds in the middle of the charming city.

There is a wide assortment of collectables ranging from artwork to food, a car show, and representatives from a pair of Findlay Automotive Group stores are there to answer questions about their new vehicles.

The environment could not have been better and while Saturdays usually generate big sales at their dealerships, Findlay Cadillac Internet Manager Sergio Brooks is soaking up the environment while telling attendees about his favorite models from the dealership situated at 993 Auto Show Dr. in the Valley Automall.

It marks the second consecutive weekend that someone from Findlay Cadillac is out in the community following the 13th annual Cadillac Through the Years, which drew record crowds and participants to Town Square Las Vegas.

Co-sponsored by Findlay Cadillac and Findlay Honda Henderson, the Jamboree has a substantial following. The traffic heading into Boulder City from Railroad Pass appears endless as visitors enjoy the small city that has no gambling and controls its growth.

Brooks, a veteran automotive sales executive, knows the value of getting out of the office to generate business. In this case, Brooks is enjoying the environment that includes thick grass and trees in a picturesque sea of green.

“We love going into the community to show the latest of features now offered by Cadillac,” said Brooks.  “Boulder City is so beautiful anyway, and this is the perfect setting.”

In this case, Brooks is showing off a 2018 Cadillac CT6 Platinum, a model that proves that Cadillac is no longer your grandpa’s car.

“Cadillac has always been all about comfort, but the latest models are evidence that the vehicle is performance-driven, too,” explained Brooks.” The 2018 CT6 has an optional Turbo charged V6 that puts out 404 horse power. With a state-of-the-art touch screen and an array of convenient technical options it’s both smart and powerful.

While the jamboree in Boulder City was a monumental success, there is no shortage of other events sponsored by Findlay Cadillac in the next few weeks.

From benefits from local schools to sponsoring performances at the highly-touted Smith Center in Las Vegas, Findlay Automotive Group personnel are all over Southern Nevada working events and establishing a massive network of clients.

“That’s what we do best,” said Brooks. “Whether it’s showing off new Cadillacs in Boulder City or providing support for music classes at various elementary, middle or high schools, we have Southern Nevada covered.”

Findlay Cadillac is part of Findlay Automotive Group, which is now in the process of constructing its 33rd dealership. The company was founded in 1961 by the late Pete Findlay, now has dealerships in Nevada, Utah, Arizona, Oregon and Idaho.

Further information regarding Findlay Cadillac can be found by visiting www.findlaycadillac.com or by calling 702-558-2600.