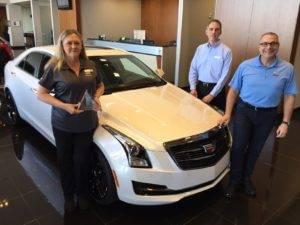 A 12-year resident of Las Vegas and a native of Wichita, Kansas, Topham worked in a restaurant of a livestock auction at her home state before becoming a Mary Kay consultant for 12 years; and finally entering the car business about 16 years ago.

Needless to say, Topham is talented enough to sell any line of vehicles, but she has chosen to dedicate her efforts to Cadillac. Since opening their doors in 2005, Findlay Cadillac has soared in popularity. In fact, it was recognized as Cadillac Dealer of the Year in 2010, 2011 2012, 2013, 2015 and 2016, by General Motors who awards this honor based on sales, customer satisfaction and several other metrics.

“I sincerely love the Cadillac line of vehicles and appreciate the opportunity to sell them to the customers that this dealership attracts,” said Topham. “Considering that this dealership is one of the largest of its kind in the country with a beautiful showroom, the entire venue is something that we’re all proud of.”

Topham said Cadillac has re-marketed itself in the past few years producing not only the luxury vehicles, while incorporating true performance at the same time.

“No longer is the Cadillac only for older consumers,” Topham said. “Many of the newer models are truly performance-oriented. The innovations provided by General Motors in the past several years are very impressive.

“Selling Cadillacs – and receiving an award like the one I just won – has been a dream-come-true for me. Selling a car generates an unbelievable thrill anyway, and the icing on the cake was undoubtedly winning the award.

“The magnitude of the accomplishment didn’t hit me until about an hour after I received my award. I must say I’m thrilled to death.”

“The car business can be very difficult,” said Saksa, who also serves as general manager of Findlay Fiat and Alfa Romeo at 210 N. Gibson Road. “It might look easy from the outside looking in, but it takes an endless amount of perseverance to be successful.

“Deb has a long list of customers from several states and it’s easy to see why. She knows her product and she maintains communications with her customers.  In a business where a balanced formula is vital, Deb has it all figured out.”

Findlay Cadillac is situated at 993 Auto Show Drive in the Valley Automall. The dealership is part of Findlay Automotive Group, which was founded more than 50 years ago, by the late Pete Findlay, whose son, Cliff, now oversees dealerships in Nevada, Utah, Arizona, Oregon and Idaho.

Further information can be found by calling 702-558-2600 or by visiting www.findlaycadillac.com.