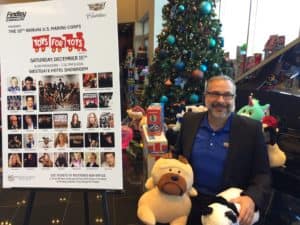 Presented in the same showroom that played host to yesteryear performers including Elvis Presley and currently Barry Manilow, Toys for Tots is a two-fold homerun attracting thousands of new unwrapped toys for children while also presenting a blockbuster concert in the hotel theater.

This year’s list of entertainment will include David Perrico’s 26-piece Pop Strings Orchestra; Robby Steinhardt of Kansas, who will be performing recording hits Carry On Wayward Son and Dust in the Wind; Las Vegas’ Zowie Bowie; the Australian Bee Gees; the nation’s No. 1 Neil Diamond tribute artist Rob Garrett; America’s Got Talent finalist magician Murray SawChuck; Las Vegas headliner Gordie Brown; one of the nation’s hottest Country Rock artists, Sam Riddle; Lorena Peril and the cast of Fantasy, among others.

“John has illustrated compassion and understanding related to the importance of giving back to our community,” said Harness, whose own expertise as a professional drummer has seen him perform throughout the nation for the past 57 years. “We have many local charities that support John’s belief that every child should have a toy under the tree on Christmas morning.”

Harness said the dealership is also proud of its relationship with the Marine Riders of Las Vegas.

“They are Marine veterans that continue to give their service to our country while paying it forward, as illustrated by Toys for Tots each year.

“The success of the toy drive and show is the result of the passion of the local residents, along with the Las Vegas entertainment community and the media all coming together for a great cause,” Harness added. “What’s donated in ‘Vegas stays in “Vegas.”

Saksa said that with the tenth annual event also comes with support that will make this show the best ever.

“The outpouring of toys is already proving that,” explained Saksa, who has been with Findlay Automotive Group for 19 years. “It really warms our hearts to see what a wonderful generous community we all live in.”

The annual Toys for Tots show is also made possible thanks to the help of Harness’ fiancé/behind the scenes co-producer Tiffani Foote, who works hand-in-hand with the producer Perrico.

Last year’s show drew a crowd of 1,546, the largest-ever for a Toys for Tots event. For fans longing for the old days in Las Vegas when live performances were the norm, the show was over the top.

“It’s an unbelievable performance,” Harness said, “and with this being the 10th year of the show, we are expecting record attendance and donations.”

“This is one of those shows that you’ll never forget,” said Harness.

“We invite the general public to drop off your unwrapped new unwrapped toys valued at $20 value or greater at Findlay Cadillac at 993 Auto Show Dr. in the Valley Automall to receive show tickets,” Harness added. “Or, tickets can be purchased through the Westgate Hotel box office.”

Findlay Automotive Group was founded in 1961 by Pete Findlay and now includes an umbrella of 33 dealerships – one is now under construction — in Nevada, Utah, Oregon, Idaho, California and Arizona.

Further information can be obtained by calling 702-558-2600 or by visiting www.findlaycadillac.com.