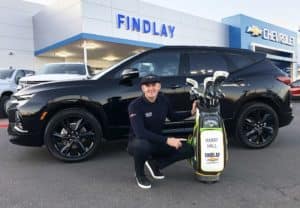 A partnership dating back four years has resulted in an ideal agreement.

Findlay Chevrolet General Manager Doug Fleming sold a vehicle to UNLV graduate and professional golfer Harry Hall in 2016; and the two have remained friends ever since.

Since the original meeting, Hall who came to UNLV from England has gone on to become one of the best amateur golfers in the world and recently turned professional.

In fitting fashion, Hall needed a new vehicle and Fleming came through with his best delivery by sponsoring the 22-year-old, 6-foot-4, 225-pounder comfortably with a 2020 Chevrolet Blazer RS. The Blazer is fun and sporty with a spacious interior, telescopic steering wheel and full of new technology!  Fleming said “It was the perfect vehicle for Harry because the new Blazer is like Harry’s golf swing which is strong and smooth!”

“It’s the greatest car I have ever had,” said Hall.  “It definitely catches everyone’s eye, that’s for sure. The sport utility vehicle has an impressive body style that everyone seems to appreciate.”

Hall said the V-6 in the Blazer has impressive power.

The Blazer is an obvious winner, and so is Hall’s career which recently saw him graduate early from UNLV in 2018. Harry was then selected to represent Great Britain in the 2019 Walker Cup match against America at Royal Liverpool Golf Club in Liverpool, England.

Since then, Hall made his professional debut on September 26, 2019 at the Alfred Dun Hill Links Invitational.  Playing on the European Tour competing on the global stage on Sunday afternoon he played head-to-head in the same group with McElroy who he beat by two shots with a score of 65 finishing 17 under par for his first professional tournament.  Now that’s a real “blazer” as defined by its original definition as a thing that blazes or shines!

Next up for Hall is the final stage of the Professional Golf Association Tour in Orlando Dec. 12-15.  He already has qualified in the first two phases of “Q school” in Utah and Dallas to make it to the finals!

“We have two winners with big futures,” said Fleming.  “We are ecstatic to have a two great new members on our team at Findlay Chevrolet.  One is the New Blazer and the second is a professional golfer!”

Further information regarding Findlay Chevrolet can be found by calling 702-982-4000 or by visiting www.findlaychevrolet.com.