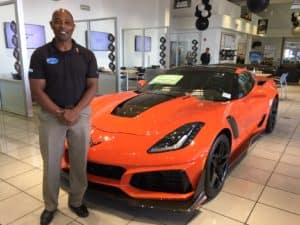 Findlay Chevrolet sales consultant D.J. Jeffers shows off a 2019 Chevrolet Corvette ZR1 Coupe at the dealership situated at 215 and Rainbow in the southwest valley. The car was sold soon after the photo was shot.

Since the day the first Chevrolet Corvette was released in 1953, the vehicle remains the king of the automobile world. Named by Myron Scott at the GM Motorama, its lifeblood is unmatched in the highly-competitive world of high-performance vehicles.

The throaty Corvette is iconic and its buyers are unique. In many cases, it sells before being delivered to the dealership. In every case, and no matter what the year, the Chevrolet Corvette remains popular and turns heads wherever it goes.

Without question, the Corvette brings light to a dreary day. It looks good, it sounds good and it generates interest before delivery.  Its lifeblood is evidenced by the fact that the Chevrolet Corvette covers seven generations. It sold for $3,498 when it was introduced.

The response to the ZR1 Coupe has been endless, according to Findlay Chevrolet Corvette guru D.J.  Jeffers, who has witnessed the vehicle’s iconic following for the past 14 years. If there is such a thing as a “home run” in the car business, the Corvette ZR Coupe has been it.

“What makes this car so great is that it has the big spoiler, the big wing and 13 intercools so its track ready and will never overheat” said the 53 year-old Jeffers. “Customers come in and just want to buy it after seeing it. It’s a very unique car, that’s for sure.

“The Corvette is the fastest car General Motors has ever built. It actually shoots flames out of the back. That’s also another very unique part of the car.”

By contrast, the 2019 ZR1 Coupe is headlined with a LT5 6.2 liter Supercharged V-8 and PFI along with the SRI Performance Package which includes 755 horsepower and 715 foot pounds of torque.

The dealership is situated at the I-215 and Rainbow in the southwest Las Vegas valley.

Further information regarding Findlay Chevrolet can be found by calling 702-982-4000 or visiting www.findlaychevrolet.com.