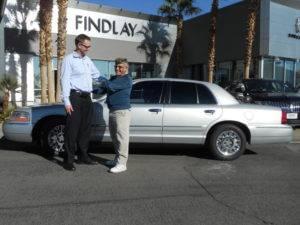 Findlay Lincoln General Manager Nathan Findlay said recently that he was blessed to have had the opportunity to get to know many veterans and active duty military, and he has a deep respect for all the men and women who serve.

It started right at home with Nathan’s grandfather. Pete Findlay was a fighter pilot in World War II flying P38s on 63 combat missions after being drafted in 1941. After serving his country, Pete operated a gas station in Panaca, Nevada, a tiny town about 165 miles north of Las Vegas.

An astute businessman with remarkable foresight, the elder Findlay moved his family to Las Vegas in 1959 and opened Pete’s Used Cars on East Fremont Street. In 1961, he founded Findlay Automotive Group, opening Findlay Oldsmobile at 3024 E. Fremont St. Since then, the group has grown to include 32 automobile dealerships in Nevada, Utah, Idaho, Oregon and Arizona.

Over the years, Findlay’s grandson Nathan, at Findlay Lincoln, has served many veterans, including Gaetano “Guy” Benza, whose story was so impressive that he was honored numerous times.

As an Army private, Benza was among the soldiers who transported supplies from boats under heavy fire when the Western Allies of World War II assaulted the beaches of Normandy on June 6, 1944.

Nathan Findlay met Benza when he brought his Mercury Marquis to the Findlay Lincoln dealership at 310 N. Gibson Road. Benza was a resident of North Las Vegas and lived more than 30 miles from the Valley Automall. Yet Benza was so impressed with the customer service Findlay Lincoln provided that he never took his Mercury anywhere else for service or repairs after his first visit.

When Benza died in September, his family decided to sell his prized Mercury Marquis, and Nathan Findlay immediately purchased the vehicle.

“We all appreciate what our service men and women have done for us over the years,” Findlay said.

“We will give all active or retired military an additional $1,000 off the sale of any new vehicle as our way of saying thank you for all of those who are serving or have served our country,” Huebner said. “We are also offering complimentary registration on any new car purchased. That figure could be up to $1,000.”