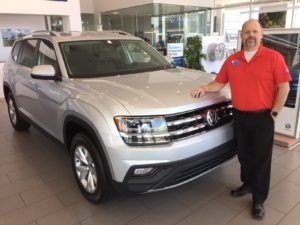 Scott Nicolari the new general manager of Findlay North VW in the northwest valley, although new to the role has worked as a general sales manager at Findlay Volkswagen Henderson in the Valley Automall for years.

Nicolari explained that his prediction for good times ahead for the Volkswagen brand is more than his naturally optimistic disposition or his desire to see his company succeed. It’s based on the brands past and some exciting recent developments.

“A lot of people grew up with Volkswagens,” Nicolari explained. “There are iconic VWs like the Beetle, the Bus, and the Rabbit. Many of the old VWs also had excellent performance. People simply do not forget a VW. That loyalty is based on the many years of good times that people have had with their VW models.”

Nicolari is encouraged by what he sees coming later this year. “This is a very exciting time because of the new models that have recently arrived, or will be here in the near future. The recently released 2018 Atlas is a large SUV with third-row seating. It’s the first time that Volkswagen has offered a third-row SUV.” Nicolari says they wish they could get more Atlas models. They’ve been well received and the supply has been low so far.

Another bit of exciting news is the all-new 2018 Tiguan mid-size SUV which was designed with American consumers in mind. Volkswagen is currently in the midst of a very strong rally. The third-row SUV’s are feeding the rally which started a couple months ago.

Another factor in VW’s recent prosperity is the new longer warranty. Both the ’18 Tiguan and the ’18 Atlas come with an enhanced six-year, 72,000 mile bumper-to-bumper warranty.

“That’s the best warranty in the business for SUV’s,” Nicolari explained. “With the size of the car, you will not outgrow the vehicle and the warranty insures that the owner will have a safe and happy experience.”

“It’s a good mix of sales consultants,” he said. “We have multi-lingual employees in every department and we all come to work to have fun.”

In addition, Nicolari said dealership would maintain its traditionally strong presence in the community.

“We have a lot of events that happen every week,” he said. “We have a Lady’s Night on the third Wednesday of each month when we bring in outside vendors for women to have fun at the dealership. Then, on the last Saturday of each month is our car show. We just changed the store to become pet friendly and invite all of our friends to bring their pets to the dealership.”

“Scott has excelled as our general sales manager at Findlay Volkswagen in Henderson for the past few years,” Corder said. “We always promote from within so it was just natural that we looked to Scott to fill the general manager position at Findlay North Volkswagen. He’s a hard worker and he’s passionate about the Volkswagen brand. We know he’ll do a great job in his new position.”

Further information regarding by calling 702-982-4800 or by visiting www.findlaynorthvw.com.