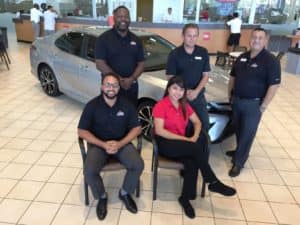 Findlay Toyota recorded an impressive total of 253 sales on Labor Day weekend, including about 80 from the dealership’s internet department. Front row, from left, John Estrella and Monaliza Pence. Back row, Antwaun Bynum, Doron Bodinger and Mike Rodriguez. The sales consultants are known as “The Fab Five.”

The Labor Day Weekend — spurred by a promotion offering free registration on the purchase of any new vehicle – generated big numbers at Findlay Toyota.

Leading the dealership to a blockbuster total of 253 sales over the weekend were Doron Bodinger, John Estrella, Mike Rodriguez, Antwaun Bynum and Monaliza Pence. Together, the five sales consultants had about 42 transactions.

Bodinger and Rodriguez are part of the dealership’s internet department, which combined for about 80 of the weekend’s transactions.

“We were on fire,” Bodinger said of the weekend’s sales activity.

A former owner of a furniture store in Las Vegas, the 53 year-old native of Israel is used to working open to close while accommodating a base of about 2,000 customers.

“We feel very good selling Toyotas,” said Bodinger, who has been with the dealership for about three years. “Our repeat business is unbelievable and we have several customers whose Toyotas are still going strong with several hundred thousand miles on them.”

“I treat people the same way I want to be treated,” said the soft-spoken Bodinger, who had never sold a car before joining Findlay Toyota three years ago. “People seem to appreciate my approach and my knowledge of the Toyota product.”

“It was an insane weekend,” said Estrella, a 26 year-old native of Las Vegas, who has been with Findlay Toyota for the past six years. “I have never seen anything like it. Over the four days, I had 10 ½ sales.
Pence, who had 7 ½ sales during the weekend, said she had never seen activity like that of this past Labor Day Weekend.

“It was a combination of excitement and shock at the the same time,” she said. “We knew it was going to be busy, but not this busy. The incentives were awesome.”

Toyota’s 2018 models have already arrived, and Bodinger is especially impressed with the latest Camry. “It’s yet another example of excellent workmanship, performance and quality.”Bodinger said.

Compared to the 2017 model, the new Camry is lower, longer and wider.

Fuel efficiency ratings in the 2018 Camry include the Camry LE with a 2.5-liter engine and eight-speed automatic transmission will reach an impressive EPA estimated 28 mpg city to 39 mpg highway, while the hybrid model produces an EPA estimated rating of 51 mpg city and 53 mpg highway.

The Camry has been the top-selling model at Findlay Toyota, which originally opened on the west side of I-95 in 1998 before moving into its current location in 2008.

Findlay Toyota is located at 7733 Eastgate Rd., in the Valley Automall in Henderson. Further information can be found by calling 702-566-2000, or by visiting www.findlaytoyota.com.