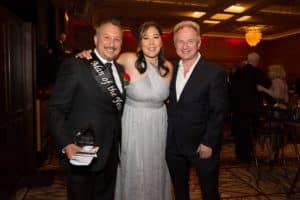 Velardi, has personally been fighting cancer since March of 2017. With help from his experienced campaign manager Stephanie Bernas, Velardi has been raising donations to battle the vicious disease.

The 48-year-old Velardi mounted a 10-week campaign prior to the annual fund raiser at the Rio that earned him Man of the Year honors. He told a full house crowd of 480 attendees in the Brasilia Ballroom about his own personal battle with the disease during his speech.

“My story is like so many others,” Velardi explained. “I had no idea that I, too, was being affected by such a vicious disease. We can never ignore our health, simply because cancer can attack without even knocking on the door.

“At the time, I went for a check-up, only to learn that I had Stage II Chronic Lymphocytic Leukemia. I had no earthly idea…One minute I was fine, and the next minute I was in the biggest fight of my life. We’re now in a wait and watch stage of my life to see where the cancer goes from here.”

When the opportunity to raise funds for the Leukemia & Lymphoma Society (LLS) surfaced, Velardi answered the call. Over a 10 week period Velardi, campaign manager Bernas and many other Findlay employees tirelessly fundraised. He shared his story and the mission of the LLS at many venues around Southern Nevada.

“When I learned that I had my own battle with cancer, I honestly felt a need to get fully-involved,” he said, adding that he’s in his second year of battling cancer. “I went to Comprehensive Care Centers of Nevada to learn that I had a particular kind of blood cancer and went to work.

“Thankfully, we can now help others battling the dreadful disease. I am so thankful that so many joined my cause to help others. The money started to roll in immediately after it was announced that I was running for Man of the Year honors. I am so thankful for the outpouring of money and concern that surfaced immediately after people learned that I was taking the cause to yet another level.”

The gathering at the Rio included dedicated efforts to help the Lymphoma & Leukemia Society that that were highlighted by a silent auction.

Thanks to Social Media and Velardi’s many friends, the money rolled in, Velardi said.

Frederick Hubbs, the campaign manager for the Leukemia& Lymphoma Society of Southern Nevada, praised the energetic Velardi during his drive to raise more than a quarter million dollars.

Findlay Toyota General Manager John Barr – himself a former Man of the Year in 2017. At that time Barr’s campaign set an all-time fundraising record for the Leukemia& Lymphoma Society of Southern Nevada. Bernas was also Barr’s campaign manager.

Barr had these words to say about Velardi. “Anthony’s passion to succeed in raising the most money ever in the state of Nevada for Leukemia & Lymphoma Society research makes me proud to not only say I work with him every day; and that he is also my friend. If anyone could beat my record, it was Anthony.”

“We are very proud of Anthony’s efforts to raise money to find a cure for blood cancer. When Anthony was diagnosed with leukemia, we were very concerned. But now we are just inspired to see how he has put his efforts toward finding a cure for himself and the millions of others fighting the disease.

“Findlay Automotive Group has been supporting the Leukemia & Lymphoma Society for years. In addition, to Anthony, we also have other employees and families fighting blood cancer. We know that better treatments are available today because of the research done by LLS. With the fundraising efforts of people like Anthony, we truly believe that a cure for blood cancer can be found.”

Situated at 7733 Eastgate Rd. in the Valley Automall, Findlay Toyota is part of Findlay Automotive Group founded by the late Pete Findlay more than 50 years ago. The umbrella now includes 33 dealerships in Nevada, Utah, Arizona, Oregon, California and Idaho.