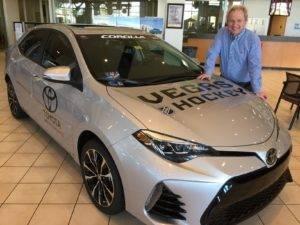 Findlay Toyota General Manager John Barr has set a goal of $250,000 during his challenge to be named Leukemia and Lymphoma Society Man of the Year.

Findlay Toyota general manager John Barr is a busy man. His dealership in the Valley Automall is the No. 1 volume dealer in their 6 state region and among the top-producing Toyota dealerships country.

And now, Barr is getting busier with the announcement that he is entered into the Leukemia & Lymphoma Society Man of the Year competition that runs for ten weeks and begins on March 1st.

Competition is based on an individual’s ability to raise funds for LLS, and Barr has his sights set on Man of the Year honors predicting that he will raise about $250,000 during the ten-week period.

A former competitive league soccer player from Portsmouth in Hampshire, England, Barr isn’t the least bit afraid of a challenge. The 18-year veteran of Findlay Toyota seems to thrive on the goal he has set.

Sponsorship opportunities are numerous during the time of fund raising and include the Man and Woman of the Year Links Fore Leukemia golf tournament March 6 at TPC Summerlin.

“Almost everyone has had an experience involving someone who has had this unfortunate disease,” said Barr, “and we want to stop the disease it its tracks.”

“Tyler invited me to attend last year’s event at the JW Marriott and I was very moved by the whole event and especially the efforts of Findlay Kia finance manager Sarah Wilbur, who was so passionate about the cause.

“Sarah was named Woman of the Year and I just felt it was my duty to compete for Man of the Year in 2017. My team is doing very well and we have commitments from many people throughout the community. We seriously want to stop Leukemia and Lymphoma in their tracks.”

Also, Barr has his own website mwoy.org/pages/snv/vegas17/jbarr5 that can be utilized for donations.

“We have done many favors for people all over Southern Nevada since we opened in 1998, and we’re now starting to call in those favors to help the Lymphoma and Leukemia Society. I am going to give everything in my power to reach our goal.”

This year’s gala is set for May 13 at JW Marriott.

For further information regarding the gala, call Stephanie Bernas at 702-566-2542 or email her at sbernas@findlayauto.com