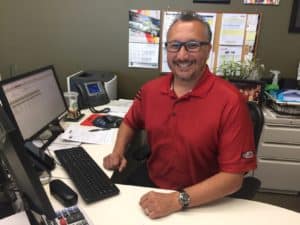 Findlay Toyota finance director Anthony Velardi will be competing for Man of the Year honors at the annual Leukemia & Lymphoma Society May 17 at the Rio Hotel and Casino.

Long-time Findlay Toyota finance director Anthony Velardi is a big fan of the annual Leukemia & Lymphoma Society. He will be participating in the 2019 Southern Nevada Man and Woman of the Year Grand Finale at the Rio Hotel and Casino Brasília Ballroom May 17.

Now 48 and a 44-year resident or Las Vegas, the personable Velardi walks the walk and talks the talk when discussing the Leukemia & Lymphoma Society. For good reason, he’s running for Man of the Year raising funds for a very worthy cause.

Velardi, who was born in Seoul, South Korea, is battling Leukemia, although you wouldn’t know it. He doesn’t look as though he’s ill and he says that he feels fine.

“I had a routine checkup in March of 2017,” recalled Velardi, who has been with the Findlay organization for 24 years. “I was told that there were some abnormalities that they found in the blood. The doctor told me to go Comprehensive Cancer Centers of Nevada, so I went there soon thereafter…  I didn’t think it was any big deal. As soon as I told them my last name, I knew I was dealing with the real deal.”

Velardi had to address the issue before going to an oncologist named Dr. James D. Sanchez in the northwest valley.

“Dr. Sanchez told me I had Stage II Chronic Lymphocytic Leukemia,” explained Velardi. “The cancer is in my blood, but progresses slower than other types of cancer, so I felt good about the fact. I am in the wait and watch stage to see where the cancer goes from here.”

The key now is helping others who are affected by cancer while also creating an awareness program through the Leukemia & Lymphoma Society. Velardi is now on his second year of dealing with his illness.

“The biggest advice that I can give to others facing cancer is to get checked up as soon as possible,” Velardi said. “I’m a good example of someone who seriously had no idea whatsoever what I was facing cancer. However, now that we have my own situation addressed, I’m much more at-ease.

“Too many times people wait until it’s too late.”

Velardi’s first fund-raiser for the Leukemia Lymphoma Society was the result of his wife, Suzanne, who steered her husband to Corks and Crafts, a bar situated in downtown Summerlin. Other events can be found by following Findlay Toyota on Facebook and Instagram or by making donations at https://pages.mwoy.org/snv/vegas19/avelardi

The 7th annual Links for Leukemia Man & Woman of the Year Charity Golf Tournament fund raiser is on Monday, April 15 at TPC Summerlin. The event will begin with an 11 a.m. lunch and be followed with a shotgun start at 12 p.m. An awards dinner is scheduled to begin at 5 p.m.

“My entire family is helping me with this,” Velardi said. “My daughter, Addison, 9, makes Chocolate-covered caramel pretzel sticks that she sells at Findlay Toyota.”

Findlay Toyota General Manager John Barr was recognized as the Leukemia & Lymphoma Society’s Man of the Year two year ago. Barr and his team raised over $200,000 for LLS.

When Velardi was diagnosed with Leukemia, the news really hit close to home.

“Anthony has been a part of our team for over 20 years and we’re committed to help find a cure for him and all of the others fighting blood cancer,” Corder continued.

Situated at 7733 Eastgate Rd. in the Valley Automall, Findlay Toyota is part of Findlay Automotive Group founded by the late Pete Findlay more than 50 years ago. The umbrella now includes 33 dealerships in Nevada, Utah, Arizona, Oregon, California and Idaho.

Further information can be found by contacting the Leukemia & Lymphoma Society by calling 702-436-4220.