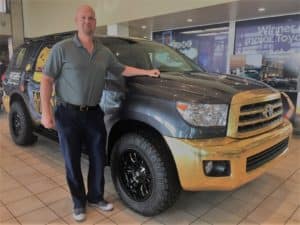 As a former Major League pitcher who played from 1996-99 with the Oakland Athletics, St. Louis Cardinals, Florida Marlins and Toronto Blue Jays,  Findlay Toyota finance manager Eric Ludwick knows about the importance of teamwork in the car business.

In each case, teamwork is what leads to success.

“I grew up in a locker room,” said the 46 year-old Ludwick, who has been with Findlay Toyota for 17 years. “Everyone has to pull the rope for one common goal. When a customer walks into our dealership, there are a multitude of people who can get the deal done.”

After retiring from baseball, Ludwick found the car business to his liking.

“When I retired from Japan where I played my last two years, I realized that retirement wasn’t good for me, he said. “I went up and down West Sahara and talked to about 13 dealerships looking for a job. Many of the dealerships turned me down, and I was shocked. The last place I went to told me to go see Rich Abajian at Findlay Toyota in the Valley Automall.”

Abajian, who served as Findlay Toyota’s general manager until he died in February of 2016, hired Ludwick “on the spot” in 2002.

Before interviewing, Ludwick talked with Darrell Deak, who he had known in AAA baseball in Louisville.

“Darrell and I had talked over the years and he said the money was good, the camaraderie was good a lot like athletics. So I decided to give it a shot.” Ludwick said.

Once he arrived at Findlay Toyota, Ludwick instantly went to work showing enthusiasm and dedication in a business that can be both demanding and addictive.

“The car business looks easy – and it’s anything but easy,” he said. “I can’t imagine doing anything else. I had the option of going back to get my degree at UC-Berkeley, but discarded the idea because I was so happy with the car business.”

Ludwick said he could not be working for a better dealership.

“We have very little turnover here and the overwhelming majority of people who work here have ten years or more working here,” he said “I think we work smarter than many other dealerships. We stay open later than some of the competition and there’s no letting up.

“This new dealership was built at the worst of times,” said Ludwick, adding that the collapse of the economy in 2008 was a true test.

Ludwick said the most popular purchases at Findlay Toyota are the Camry and Corolla models.

“The Corolla is the top-selling car in the world,” Ludwick said. “There’s no question about it at all.”

Proof in the pudding is the fact that Findlay Toyota is among the top 20 Toyota stores in the nation. The dealership has never-ending promotions and Ludwick is among many who feel that the continued promotions are among the reasons why the dealership recovered from the crash of the economy.

“We were selling a quarter of the cars that we’re currently selling,” Ludwick recalled. “This dealership has lived on because of its never-ending dedication to getting the job done.”

Situated at 7733 Eastgate Rd., in the Valley Automall in Henderson, Findlay Toyota is headed by general manager John Barr.

Further information can be found by visiting www.findlaytoyota.com or by calling 702-566-2000.