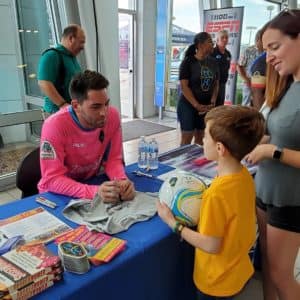 The art of creating and delivering a promotion includes countless elements, and one recent event presented by Findlay Volkswagen Henderson in the Valley Automall hit the ball out of the park.

Findlay Volkswagen Henderson presented a “Lunch with the Lights,” which included a meet and greet with pro soccer player Thomas K. Olsen, starting goalie for the Las Vegas Lights FC, June 6 that drew hundreds of fans.

“We loved having Thomas (TKO) here at Findlay VW Henderson,’ said dealership general manager Melisa Eichbauer.  “His enthusiasm for the Lights FC fans and our city is infectious!

“He made every person in line feel special, especially the kids who came out to see him. Thomas Olsen is a true class act and representative of what “Vegas Born” truly means!”

“It’s amazing how we have seen the Vegas community unite and whole-heartedly embracing of our local teams,” she said. “The passion from the city is palpable and is making a national statement; that being, that Las Vegas professional sports are here and all come with a fan base that is as strong as those teams who have been around for years.

“I feel that it is a privilege, a responsibility for us at Findlay Volkswagen Henderson as a local business to embrace and support our community, its fans, its players and its youth by using our platform to bring everyone closer together through events like “Lunch with the Lights.”

Sponsorships for the event were provided by Chick-Fil-A, Jarritos, ESPN and Llama Mama.

Further information regarding Findlay Volkswagen Henderson can be found by calling 702-558-6600, ext. 6625 or by emailing mcolletti@findlayauto.com. Located at 983 Auto Show Dr., the dealership is part of Findlay Automotive Group founded by the late Pete Findlay in 1961.The umbrella now includes 33 automobile dealerships in Nevada, Utah, Arizona, Idaho, Oregon and California.