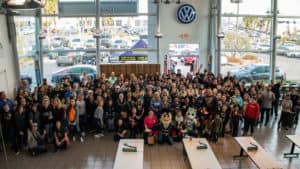 Findlay Volkswagen teamed up with an organization called Generosity Feeds whose mission is to feed school kids who come from food insecure homes.

On Sunday, January 26th over 500 Findlay Volkswagen employees and members of the community gathered at the dealership for a meal packaging event. The goal was for the volunteers to pack 10,000 meals and to raise $10,000 in funds.

The meals prepared and funds raised will benefit Whitney Elementary School on Boulder Highway and Tropicana and other Clark County schools in need.

In order to package 10,000 meals it was estimated that 200 volunteers would be needed. Marcy Colletti, marketing director for Findlay Volkswagen Henderson felt confident that they would get about 200 volunteers.

The results were well beyond what Colletti had imagined. Over 500 volunteers came to lend a helping hand. Some of them heard about the event on Facebook others heard about it from their employers. The volunteers were able to pack a little more than 10,000 meals.

Colletti said she was truly moved by the outpouring of support to the point of becoming emotional during the event.

“We knew it was a big challenge but when it comes to donations and volunteering, we have total confidence in our community” Collettie said.

The employees and customers were happy to help with the event.

“I am truly humbled,” said Gahn, “It’s amazing and I cannot thank you enough. Thank you with all my heart.”

Leticia Apablaza one of the volunteers said “My team and I had an amazing time during the Generosity Feeds event. Witnessing hundreds of people coming together to serve our community was a very inspiring and touching experience.”

Further information regarding Findlay Volkswagen can be found by calling 558-6600 or by visiting www.findlayvw.com.

Findlay Volkswagen Henderson is part of Findlay Automotive Group founded by the late Pete Findlay in 1961. Today there are 32 Findlay dealerships in six states including California, Utah, Nevada, Arizona, Idaho and Oregon.