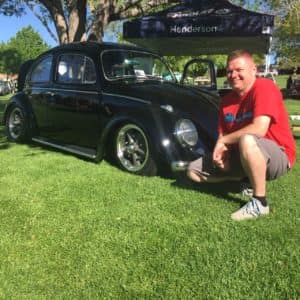 Findlay Volkswagen Henderson Parts Manager Frank Mattos is also a VW enthusiast, as evidenced by his talents rebuilding and refurbishing Volkswagens such as a 1962 Beetle.

Findlay Volkswagen Henderson parts manager Frank Mattos is well-suited for his position.  He has worked at the dealership for the past several years and is a Volkswagen enthusiast who has restored many classic VWs.

Frank’s latest work is a classic black 1962 VW that stands out big-time at car shows, as evidenced by a recent VW gathering in Boulder City.Complete with a custom red interior, the vehicle looks as good as it sounds.

The passion for classic Volkswagens started before Frank was old enough to drive.  Frank’s father was in the army and while they were Hawaii during his middle school years, Frank saw a black chop top bug that “blew his mind”and his love for Volkswagens started.

Needless to say, Frank was struck by the fever that only car enthusiasts understand. That same fever is still evident by Frank’s “addiction” to VW and its history.

It was at the age of 16 that Frank purchased his first VW, a 1969 light blue squareback; and he has owned one model or another of an air-cooled VW ever since.

When asked if he ever regretted selling one of his VWs, he immediately answered with “Every single one of them.”

At an event called Bugorama in Sacramento in 2004, Mattos fell in love with a 1962 “metallic root beer Volkswagen Beetle that was being hauled on a trailer.

“I had to have it,” Frank would later say. “The car needed an engine and some cosmetic TLC; it was the wheels that caught my attention.  I followed the trailer to its parking spot. It had no rust and it had a great transmission, so I ended up hauling the Bug back to Washington State that week.”

Never one to sit on his laurels, Mattos decided to try and sell the ’62 so that he could focus another project; that being a ’57 VW Bug.

“The car needed a paint job,” so I got that done,” he recalled. “When I went to check on the progress of the paint job, I saw a completely different car than what I had envisioned but the guy told me the body was just too nice to give the car anything but the best paint job.”

“Frank is such a genuine person,” she said of Frank, who has been employed with Volkswagen since 1999 and with Findlay Volkswagen Henderson since 2015. “Not only does he care deeply about our brand but his commitment to growing his team to ensure that our customers receive the very best service is evident in his work.

“You don’t find people like Frank very often. Not only has he spent 20 years with VW, he shows up every day with a passion to be the best.

“I love that he spent time on this bug with his family. It highlights the epitome of what we stand for! Family means everything and family plus Volkswagen equals a lot of love!”

Situated at 983 Auto Show Dr. in the Valley Automall, Findlay Volkswagen Henderson is part of Findlay Automotive Group founded by the late Pete Findlay in 1961.

Further information regarding Findlay Volkswagen Henderson can be found by calling 702-558-6600 or by visiting www.findlayvw.com.