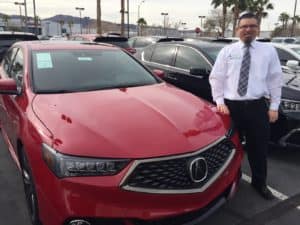 The 2019 TLX A-Spec has a long list of standard items, according to Findlay Acura veteran sales manager Brian Castaneda.

“The new body design came out last year,” said Castaneda, a native of Southern California who has lived in Las Vegas for the past ten years. “The biggest change in the vehicle is the four-cylinder engine for those customers looking for fuel efficiency. The TLX A-Spec now offers 206 horsepower and 290 horses for the V-6.”

“One difference between the two engines is that the six-cylinder comes with a nine-speed automatic transmission,” explained Castaneda, who has been selling cars for 12 years. “The transmission improves fuel efficiency.”

The interior comes with a luxury feel that includes leather, ten-way power seating and Apple CarPlay along with a touch screen, a navigation system and a 10-speaker sound system, dual zone climate control and a keyless entry and start.

“This vehicle will actually stop itself before colliding with a vehicle in case the driver is not fully attentive,” Castaneda explained.”

The buyer profile for the 2019 A-Spec has attracted a wide variety of buyers, Castaneda explained.

“The folks who are buying the TLX are getting a luxury sedan with the sports feel,” he explained. “You can say that the buyer gets the best of both worlds with this car.”

Castaneda said the Acura is built to last.

“Acura has the highest retention of any other brand that I’ve sold,” Castaneda explained. “I don’t have to worry about my customers as far as the dependability is concerned.”

Castaneda’s many years in the car business could have led him to any dealership in the city.

“I chose Findlay Automotive Group because they sold me on their culture,” he explained. “It’s the real deal here. The community involvement by this company is unbelievable.”

Findlay Acura is headed by general manager Kevin Hicks. The dealership is situated at 315 Auto Mall Dr. in the Valley Automall. For more information call (702) 982-4100 or visit www.FindlayAcura.com

Further information regarding Findlay Automotive Group can be found at www.findlayauto.com.