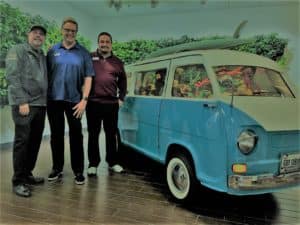 When Findlay Automotive Group built a state-of-the-art Subaru of Las Vegas dealership in the Southwest Las Vegas Valley about a year ago, general manager Burton Hughes knew that he wanted to highlight the facility with an aquarium.

A former resident of Hawaii, Hughes’ idea became reality thanks to dealership parts manager Kelly Brian, who reached out to Acrylic Tank Manufacturing in Las Vegas along with Certified Auto Body to create a first-of-a-kind work of art that includes an aquarium inside a classic 1969 Subaru 360 van.

Several modern day gear heads went to work, as only automotive enthusiasts can when presented with a challenge.

The shell of the van was gutted and customized to allow for an aquarium. Every portion of the van had to been modified for the interior, which is now the home of one of the most interesting aquariums in the world.

To say that the creation is a work of art would be a definite understatement.

In a teamwork effort spearheaded by Brian, the interior of van was transcended into a unique and colorful aquarium complete with salt water fish and a replica of the original Welcome to Las Vegas Sign in the back of the van.  Still other features included custom wheels and a surfboard that was added to the roof of the van to create a beach scene.

Needless to say, the Subaru van immediately drew attention in an industry that thrives on cutting-edge marketing.

Better yet, their creation will be showcased on a popular reality show called “Tanked” which will premiere on the Animal Planet channel in mid-December.

“At first I thought it was the craziest idea ever,” Hughes said. “We called the production company and the next thing we knew, the idea became a reality.”

The new aquarium is more than unique. Its salt water psychedelic, thanks to the work of several automotive experts that included off-road racer and body shop expert John Koeth along with body repair technician Tony Martinez and manager Speedy Kinard and all of Certified Auto Body team.

“This was the most unique project that we have ever been a part of, “ said 53 year-old Kurtis Rosborough,  the owner of Certified Auto Body. “Just to see what our people did was amazing. I was in awe. This was a full-fledged Subaru 1969 360 van and we totally dissembled it. I didn’t know what we were getting into, but thankfully, we have some very talented people.”

Rosborough said Certified Auto Body provides all of the body work for Subaru of Las Vegas.

“This is another step in our relationship with Subaru of Las Vegas. Subaru is a very hot product now and the customers love the vehicles.”

“It fits the dealership perfectly,” said Hughes of the aquarium. “It’s exactly what this dealership represents and it embraces the beauty of the store. It’s an adventurous addition to Subaru of Las Vegas.”

“It took us about six months of tedious and intricate detail work,” Brian said. “This is one of those projects that we’ll never forget.”

Subaru of Las Vegas, a Findlay Automotive Group dealership is situated at 6455 Roy Horn Way in October 2017 on the 215 Beltway & Rainbow in the southwest valley.

Further information can be found by calling 702-495-2100 or by visiting www.subaruoflasvegas.com.