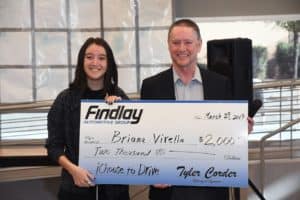 Virella was awarded a check for $2,000 from Findlay Automotive Group. The money will serve her well as she moves on to college next year.

The energetic and talented Virella directed and produced her film entitled “Three Seconds” which deals with the dangers of texting and driving.  She bested the competition that included more than 200 entries from teens all over southern Nevada.

Virella lauds her father for helping with the video entitled “Three Seconds” but in the end she was a one woman team creating the title, the theme and the impact. The fact that April is Distractive Driving Awareness month makes this message timely.

“My dad told me about the contest,” Virella explained. “He’s my inspiration and he’s also the person who taught me everything I needed to know about film. Without his help, I wouldn’t have known how to hold the camera.”

Virella also understood the importance of having a message that had impact.

“I stayed up until 11 o’clock at night working on the film,” she said. “I studied the shots I had and wrote down the entire script. I also did my voiceover and edited it, too.

“The amount of time it takes to upend a person’s life –three seconds — is unbelievable.  The blink of an eye is all it takes to have an accident that can kill everyone. I don’t look at my phone when I’m driving.”

Virella said the usage of cell phones has reached an epidemic stage.

“It’s true,” she said, “and it’s not worth having an accident. The harsh reality of it all is mind-boggling. In my video, the car crash happens and the screen goes dark. The more people understand the importance of not talking on a cell phone, the less chance that we’ll have another accident.

“Accidents can – and usually do – turn peoples’ lives upside down in a split second. This entire scenario is out of control.”

In a complex world of video, the energetic and focused Virella has an impressive list of colleges that have already accepted her, including Purdue University, Montana State University, University of Nevada Reno and School of the Art Institute of Chicago, which offered her a scholarship of $72,000.

While her options are still open for the time being, Virella is leaning toward Purdue and MSU. She is also awaiting a valuable government scholarship that will also help with the offer from Purdue.

“The $2,000 is really nice considering that Purdue is a very expensive school,” said Virella.

Findlay Automotive Group CFO Tyler Corder lauded all of the students that competed in the program,

“This was our sixth annual “iChoose to Drive video contest and it continues to grow each year,” he said. “This year, we had 210 video entries from local teens and received more than 70,000 online votes.

“The purpose of this program is to raise awareness of the dangers of distracted driving. We are extremely pleased that the program continues to grow because that means that we’re raising the awareness of safe driving among Clark County teens.”

Virella’s winning 30-second video PSA will air on dozens of Cox Cable channels now through mid-June and will be shown on waiting room TV monitors at DMV locations throughout Nevada.

The promotion was a joint effort with Findlay Automotive Group and Cox Media.

Findlay Automotive Group was founded in 1961 by the late Pete Findlay. The umbrella of 33 stores includes dealerships in Nevada, Utah, Arizona, California, Oregon and Idaho.