Las Vegas couple’s ’66 Cadillac convertible to be highlighted at Cadillac through the Years Sunday, April 29 at Town Square 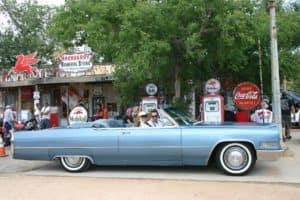 Classic Cadillac enthusiasts and fans will again welcome the color and history of an iconic vehicle when the 13th annual Cadillac Through the Years car show is presented Sunday, April 29 at Town Square at 6605 Las Vegas Blvd.

Presented by Findlay Cadillac and the LaSalle Club of Las Vegas, the popular event combines the shopping of Town Square with the charm of classic Cadillacs from 11 a.m. until 4 p.m.

Along with the classic vintage Cadillacs will be some of Las Vegas’ top tribute artists performing throughout the day including the King of Diamonds Rob Garrett;  Frank Sinatra tribute artist Gary Anthony Meyers , who is running for Lieutenant Governor of Nevada; the hottest Tina Turner Tribute artist in North America, Cookie Watkins; and Elton John tribute artist Gene Sironen.

With more than 100 classics along with showings of the newest Cadillacs, the event has proven to be a must-see gathering. Among the vehicles highlighted will be a 1966 Cadillac convertible owned by Las Vegas businessman Jared Anderson and his fiancée Madelyn Feller.

Anderson, a former resident of Foster City, Calif. , scoured the Bay Area before finding the perfect choice in the ’66 Cadillac convertible in 1996. The car was located in a classic automobile dealership in Pleasanton.

“It was perfect,” Anderson said. “A triple blue ’66 Cadillac Deville convertible that was just within my price range.”

Maintaining the vehicle was another challenge, as Anderson discovered.

“A car like the Caddy that was destined to take long trips in the desert required a crash course in automotive engineering from the mid-1960s,” Anderson said. “Keeping it reliable and road-worthy became an unforeseen, time-consuming and expensive hobby. Then, the fact that many auto shops stocked reproduction parts and enhancements for Chevy, Ford, Mopar, etc. but not Cadillac – or any other American luxury model – was an addition source of frustration.”

After moving to Las Vegas in 2003, Anderson started the process of heat-proofing the Caddy.

“”This ultimately resulted in removing and restoring the engine in 2011 and then replacing it with a small-block Chevy 350 HO crate motor and re-cased TH 400 transmission. While not as powerful as the stock 429, it greatly enhanced the reliability, compatibility and gas mileage improving it from 13 miles to the gallon to 20 mph on the highway.

“The changes also made the car more suitable and safer for road trips.”

Anderson and Feller take their vehicle on very interesting road trips throughout the Southwest.

“While many classic car owners’ interests are limited to presenting their vehicles at shows or cruising them around their neighborhoods, my ambition was always different;  to drop the top and cruise down a lost desert highway to my destination for a multi-day road trip,” he said. “For Vegas residents, the best time for road trips is in the spring and fall. Frequent road trip destinations for my fiancée and I include Sedona, Palm Springs, the annual Route 66 Run in May, Death Valley, Monument Valley, San Luis Valley and Zion.”

“Who would have thought 13 years ago that this event would turn into the grand scale that it is today,” said Findlay Cadillac General Manager John Saksa. “Every year, it just gets better and better with Cadillac owners competing to outdo one another in pride and display of their classic Cadillacs.”

Findlay Cadillac is situated in the Valley Automall in Henderson.  Founded by the late Pete Findlay in 1961, the dealership is part of Findlay Automobile Group that includes 32 dealerships in Nevada, Utah, Arizona, Idaho and Oregon.

For more information about Findlay Cadillac call (702) 558-2600 or visit www.FindlayCadillac.com.

0 comment(s) so far on Las Vegas couple’s ’66 Cadillac convertible to be highlighted at Cadillac through the Years Sunday, April 29 at Town Square