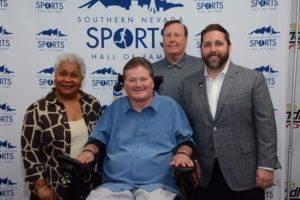 The incoming class for the 21st annual Southern Nevada Sports Hall of Fame was announced March 14 at Findlay Toyota. The list of inductees present a fascinating look at the past and the present.

The diverse class of 2017 includes the late Overton Curtis, one of the best all-around athletes of his era who played at Utah State University before signing with the Pittsburgh Steelers and coaching at both Valley and Rancho high schools; golf pro and highly-respected and golf instructor Butch Harmon; open wheel automobile racer Sam Schmidt; the Las Vegas Bowl and most notable professional boxer Floyd “Money” Mayweather.

“We really need to thank people like Cliff and Robby [Findlay] for keeping this rolling for 21 years,” said SNSHF president Dan Dolby. Findlay Automotive Group has long been the SNSHF’s most devoted supporter. Of the 2017 group of honorees Dolby said “We could not have a better class than this one. These are all people who have great commitment and have built this valley.”

Indeed, the latest group of inductees represent a wide range of talents from a variety of athletic disciplines.

The Sam Schmidt story is among one of triumph, tragedy and perseverance. Schmidt a 22-year resident of Henderson reached the pinnacle of his career when he won the Las Vegas 500 in 1999. This held special meaning for him since his early racing career was at the pole at Las Vegas Motor Speedway.

Soon after during testing at Walt Disney World Speedway on Jan. 6, 2000, Schmidt was involved in a horrific accident that left him a quadriplegic. A tireless worker and dedicated individual despite his setback, Schmidt is now laboring to find cures and treatment for paralysis. Schmidt also went on to found Sam Schmidt Motorsports which became the most successful racing team in the history of Indy Lights Series.

“This is a real honor,” Schmidt told the gathering at the Hall of Fame. “There are a lot of icons in the room that are also my friends.

“I will never forget winning at Las Vegas Motor Speedway.”

The Las Vegas Bowl has become one of the city’s most iconic and enduring sporting events. Since the first game in December of 1992, the event has mushroomed in attendance and drawn some of the country’s most respected college football teams. The Las Vegas Bowl current features teams from the Pac-12 and Mountain West conferences.

Eight of the last 12 Las Vegas Bowl games hosted sold-out crowds at Sam Boyd Stadium. The annual game played each December is the result of several Las Vegas notables and visionaries that founded the event.

Mayweather, a Las Vegas resident, is known as one of the greatest fighters of all time with a current record of 49-0. He has recorded 26 knockouts and 12 world championships in five classes.

“It’s really amazing what Mayweather has done for Las Vegas economically,” said long-time UNLV announcer Dick Calvert, a past inductee of the SNSHF. It’s estimated that his boxing career has generated over one billion dollars in revenue that’s why they call him Floyd “Money” Mayweather.

The group will be inducted June 2 at the Orleans Arena.

The SNSHF is a non-profit organization committed to recognizing the outstanding achievements by Southern Nevada athletes, both in the world of sports and the community.

Proceeds from the event will be donated to organizations committed to the support and enhancement of Southern Nevada youth through active participation in programs that promote leadership, values and character through sports.

Further information can be found by visiting www.SNSHF.com.