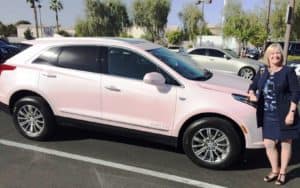 Mary Kay Independent Sales Director Cheryl Gainsford recently earned the use of a 2018 XT5 for two years after recording top honors with the company.

Mary Kay Independent Sales Director Cheryl Gainsford might be getting used to picking up new Cadillacs from Findlay Cadillac in the Valley Automall.  She earned the use of a 2018 pink XT5 Cadillac for two years for the fifth time in what has proven to be the ultimate reward for hard work and success.

A native of Albany, N.Y., Gainsford was formerly a general contractor in Washington State until 1996.  She joined Mary Kay in 1990 before becoming an Independent Sales Director in 1994. Gainsford moved to Las Vegas 5 years ago and has been very successful here.

“It’s incredible to be a part of a company that rewards such a beautiful pink Cadillac XT5,” she said. “I’m so grateful to the Mary Kay Company as well as to my customers and consultants who have worked together to make this happen.”

“The work it took to get that Cadillac was not only the work of Cheryl, but also her entire unit,” said Deb Topham. “It’s not an easy business by any means, and requires intense dedication.”

Topham said the car earned by Gainsford is a 2018 Cadillac XT5 luxury collection.

“It’s perfect for her line of work,” Topham said. “It allows her to carry clients and consultants as well as a vast amount of product in the cargo area. Not only that but the car is very sharp and it draws attention no matter where it’s being driven.”

Topham said the power plant included in the XT5 is a 3.6 liter V-6.

“The 2018 XT5 not only has great power, but the suspension is also very impressive,” Topham said. “The vehicle hugs the road and its ride is unbelievable.”

“We have many promotions throughout the year and this particular one is among my favorites,” said Saksa. “It’s always gratifying to see someone be rewarded for their efforts, and earning the use of a Pink Cadillac XT5 for two years is a tremendous reward, that’s for sure.”

Since the Career Car Program’s inception in 1969, more than 157,000 independent sales force members have qualified or re-qualified to earn the use of a Mary Kay Career Car. Currently, 5,000 Mary Kay Career cars are on the road nationwide with approximately 1,100 of those being the coveted Mary Kay pink Cadillac.

The dealership is headed by general manager John Saksa. Further information can be found by calling 702-558-2600 or by visiting www.findlaycadillac.com.