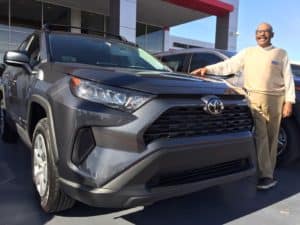 Findlay Toyota fleet manager Charlie Thrash is seen with the 2019 Toyota Rav4 at the dealership in the Valley Automall.

In a region of the nation dominated by outdoor recreation, the 2019 Toyota Rav4 has answered the call since arriving at Findlay Toyota in the Valley Automall.

A crossover Sport Utility vehicle, the Rav4 was debuted several months ago before arriving in dealership recently. Longer and wider than the 2018 Rav4, the vehicle is 57 percent stiffer and sits a half-inch higher than the previous model.

A hybrid model is also available.

Dealership fleet manager Charlie Thrash said the response to the new Rav4 has been very good.

“It’s been super strong,” said Thrash, a 55-year veteran of the car business. “Our customers want an SUV-type of vehicle without the size of a regular SUV. They want something comfortable that handles city driving as well as off-road.

“It’s been completely redesigned and includes all of the safety features that Toyota offers. A lot of people have owned a Rav4 before, so they know that they’re getting even more with the latest model.”

Dealership new car manager Kody Grady, a 20-year veteran of the car business, added that the new Rav4 has filled many needs for today’s car buyer.

“Toyota does its homework and the new Rav4 is an example of that,” said Grady. “This particular vehicle gives you the utility of an SUV along with the amenities of a high-line sedan.”

Antwaun Bynum, who has been in the car business for nearly 14 years, actually played a big role in the addition of rear air conditioning in upgraded Rav4 models.

“I suggested to the Toyota design team that the Rav4 was in need of rear air for the Rav4 especially in the southwest,” he explained. “The team listened to me and the rear air has been a huge benefit.”

Further information can be found by visiting www.findlaytoyota.com or calling (702) 566-2000. Situate at 7733 Eastgate Rd., the dealership is the top-selling Toyota dealership in the state of Nevada and ranked among the highest in the country.