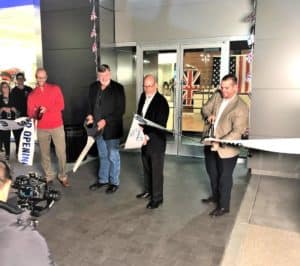 In traditional company fashion, the grand opening was impressive, the crowd was large and the event took another step in an impressive journey that first started in 1999.

With a large crowd and a celebration that included skydivers landing on the property, Jaguar Land Rover Las Vegas set the bar as it relates to grand openings. The coordination of the opening resulted in skydivers, a band, food, and a full-house of customers who toured the impressive dealership.

When the British born Land Rover franchise became available in Southern Nevada, it didn’t take long for its executives to approach Findlay Automotive Group, which eagerly accepted the offer to team up.

Land Rover executives recognized the credibility and respect of Findlay Automotive Group in Southern Nevada, and immediately set out to ink an agreement with the Las Vegas-based company. In typical fashion, another new Findlay Automotive Group dealership graced the southwest Las Vegas valley with a huge crowd that included valet parking, a band and an impressive collection of food and drink.

To say that the all-new Jaguar Land Rover Las Vegas is impressive is an understatement, and the brands represent models that are known all over the world.

Dealership Centre Manager Ray DiNardi has been with Findlay Automotive Group since 1988 and he was very impressed with the grand opening and the new building.

“We outgrew our old facility on West Sahara with the addition of Jaguar,” he said “With our new 12-car showroom and a 47,000 square foot facility we needed more space and easier access. The I-215 Beltway has easy access from all parts of the valley.”

DiNardi said the customers are very pleased especially noting the fact that the service department has increased its service capacity and added full-service availability on Saturdays.”

“Our Land Rover buyers today are a mix that spans everyone,” said DiNardi, a native Las Vegan. “The product ranges from $40,000 on up to the sky’s the limit,” he added.

“Only the better-performing dealerships are qualified to receive the designation,” DiNardi explained. “It’s a prestigious honor and we’re proud to be selected.”

“I like the Land Rover because it feels very comfortable, and it accelerates very well,” said Mr. Peterson, 67, and a 57-year resident of Las Vegas. “The car is extremely reliable and a damned good-looking vehicle.”

The event served two purposes including the launch of the all-new all-electric plug-in Jaguar I-PACE SUV.

“Findlay now has three dealerships located along the 215 Beltway near Rainbow Avenue,” Corder said.  “The first dealership was Findlay Chevrolet which opened in 2007. Then we added Subaru of Las Vegas in 2017 and now we’ve added the new Jaguar Land Rover Las Vegas. This area in the southwest part of the valley is now becoming a booming area for auto sales.”
Corder added, “Findlay has operated the Land Rover franchise on West Sahara Avenue since 1999. With the recent addition of the Jaguar franchise we had outgrown our West Sahara location. Our new location allowed us to upgrade the facility and also provides room for future growth.”

Further information regarding the dealership can be found by calling 702-579-0400 or by visiting www.jlrlv.com.