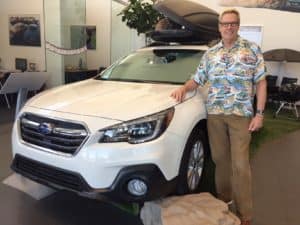 Subaru of Las Vegas general manager Burton Hughes is seen with a 2018 Outback at the dealership at 6455 Roy Horn Way.

The 2018 Subaru Outback at Subaru of Las Vegas has several reasons for being lauded by an assortment of automotive magazines and the automotive media more broadly.

Among the plaudits are Parents Magazine and Edmunds.com which recently awarded the 2018 Subaru Outback, which has been named Best Family Car among the top ten family cars and the best SUV-like wagon.

Subaru of Las Vegas general manager Burton Hughes’ daughter, Emma, was involved in a serious car accident while driving her 2010 Outback in Fairfield, California a few years ago.

“She was in the second lane of the I-80 when a truck moved into her lane,” recalled Burton Hughes, who has been the GM of Subaru of Las Vegas for the past 11 years. “The impact sent her car under the trailer of an 18-wheel big rig which caused the truck to jack-knife before both vehicles rolled multiple times.

“Emma’s car was sailing through the air, and many people stated it was so dramatic that it looked like a Hollywood production,” Hughes explained. “My daughter received a slight concussion, and her little dog was fine other than the fact that he didn’t want to ride in a car any longer.” 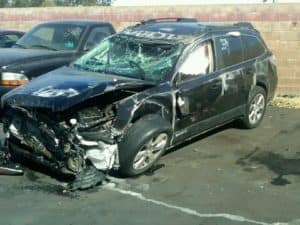 Subaru of Las Vegas general manager Burton Hughes’ daughter Emma has no recurring injuries after an accident with a big rig several years ago while driving her Subaru Outback in Fairfield, Calif.

Emma is doing fine now with no residual effects from the accident, and even Leon, her Pom-Chi, is back to riding shotgun with her in the replacement vehicle…yes, another Subaru Outback.

“The accident proved to be the ultimate test for the Outback, which protected its occupants in what is unquestionably an extreme situation.”

“We tell our customers about Emma’s accident and show them the pictures,” Burton said. “It speaks volumes about the safety of the Subaru Outback in a real-world situation.”

Subaru of Las Vegas, a Findlay Automotive Group dealership, relocated to a brand new facility at 6455 Roy Horn Way in October 2017on the 215 Beltway & Rainbow in the southwest valley.

“We’ve been experiencing record sales ever since we relocated to our seven-acre, nearly 70,000 square-foot facility,” Hughes said. “There has been a very good balance of sales between our eight different models—with the recent addition of the All-New 2019 3-Row Subaru Ascent that will seat 7 or 8 passengers.

Further information can be found by calling 702-495-2100 or by visiting www.subaruoflasvegas.com.