The ‘17 Malibu an American icon available at Findlay Chevrolet 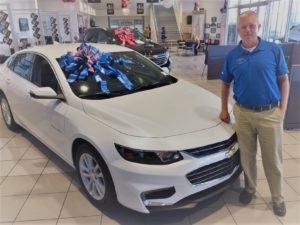 General Motors has created many game changing models during their 108 years building vehicles. Among the models that have remained most well-known has been the Chevrolet Malibu, which was first introduced in 1964.

During its early years, the Malibu was available in a full range of body styles including a four-door sedan, two-door Sport Coupe hardtop, convertible and two-seat station wage.

The Malibu, ceased in 1972, back when the Beach Boys and the Beatles were the talk of the music world. The mid-sized Malibu was revived in the 1997 model year as a front-wheel drive sedan. Today you’ll see the 2017 alive and well at the showroom of Findlay Chevrolet.

From the beginning, the Malibu has been synonymous with good times and a free spirit; along with the Chevrolet performance that has lived on for decades. In fact it’s safe to say it’s successfully transitioned into the twenty-first century since over 3 million Malibus have been sold since the year 2000.

The 2017 Malibu comes standard with a 1.5 liter four-cylinder Direct Over Head Cam engine with turbo charger, DI and Variable Valve Timing (VVT); the 2.0 liter Premier. Horsepower ratings of 160 to 250 depending on trim level. It is also available with a hybrid powerplant. It’s fuel-efficient with the L trim level getting an EPA estimated 27 mpg in the city and 36 mpg on the highway.

The Malibu is also available as a hybrid and comes with 1.8-liter engine reaching an EPA estimated 49 mpg in the city and 43 mpg on the highway. The hybrid also has a Driver Efficiency Gauge which provides feedback on how driving habits affect fuel economy.

The vehicle has been touted for its windswept body lines along with an agile stance that gives the car a sleek look. It is available with LED daytime running lamps, dual exhaust outlets and LED taillamps. What’s more those who opt for the premium package will enjoy heated driver and passenger seats, a 9 speaker Bose audio system, a rear vision camera, SiriusXM Satellite radio and much more.

Findlay Chevrolet sales consultant Matt Masluk, who has been in the car business 2002, said the ’17 Malibu has many amenities that have been well-received by the customers.

“For instance, the Apple Car Play/Android auto allows people to text hands-free; and view their maps off their phones,” said Masluk, a native of Boulder City. “They’re standard on most of the models.

“Especially with the new body style, the ’17 Malibu can appeal to a younger generation, as well as those who grew up with Malibus.”

Situated at 6800 S. Torrey Pines Dr., in the southwest valley, Findlay Chevrolet is headed by Doug Fleming and is part of Findlay Automotive Group founded in 1961 by the late Pete Findlay, whose son, Cliff, now oversees 31 dealerships in Nevada, Utah, Arizona, Oregon and Idaho.

Further information regarding the dealership can be found by calling 702-982-4000 or by visiting www.findlaychevrolet.com.