The 2018 Stelvio Quadrifoglio boasts of 505 horsepower at Findlay Fiat 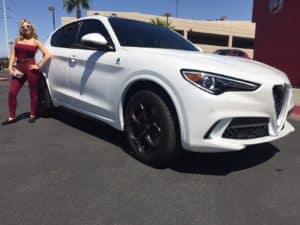 When Alfa Romeo speaks, the world sits up and pays special attention to one of the company’s ingenious mechanical masterpiece.

The newest addition to the Alfa Romeo fleet of vehicles has its share of intrigue with its Italian performance and craftsmanship. Those in-the-know realize that the sport utility vehicles that we know about has been quickly upstaged with the entrance of the Stelvio Quadrifoglio.

It is true that success is measured by the traffic and in this case, the traffic was so strong that Findlay Fiat sold the Stelvio Quadrifoglio very quickly.

Among the buyers of the 2018 Stelvio Quadrifoglio is Ashley Henderson, an Alabama native who relocated to Las Vegas about seven years ago. She was the first buyer of the Quadrifoglio, which is highlighted by a four-leaf clover emblem.

Henderson had actually committed to purchasing the Alfa Romeo Stelvio TI Sport, but it was the engine on the Quadrifoglio that captivated her.

“The sound of the engine is like no other,” she said. “It has a deep throttle. It has four different drive settings. I told them that all I wanted was for them to throw in a hat, and it was deal.”

Henderson was impressed when she learned that the Quadrifoglio has been rated over the Porsche Macan by some car critics.

“I was looking all over town for a Porsche Macan,” she said. “I liked the price point and the prestige of Porsche.”

Henderson had an interesting experience when she was out driving her new ride. Another driver “called me out” and the two put the pedal to the metal.

“When I approached the stoplight, a Henderson police officer was sitting there waiting on me,” she said. Thankfully, “The only question he had for me was where the clover leaf on the car came from. He was a really nice guy; and all he gave me was a verbal warning.”

“I have been doing this for almost 20 years and I have sold everything including Ferrari’s, Maserati and a variety of other high-end vehicles,” Brooks said. “Selling something like this is a huge thrill, especially something as cool as an Alfa Romeo. Then, when you add in the customer’s personality, it makes the entire transaction something that you’ll never forget.”

Other than the engine, Henderson also loves the interior of her Quadrifoglio, which is priced at more than $87,000 out the door.

“It’s worth every penny,” she said. “I can’t wait to take it to Zion in southern Utah.”

Henderson is also planning to take her Quadrifoglio to Spring Mountain Motor Resort and Country Club in Pahrump, the site of a road-racing school.

“There is nothing that this car cannot do, and we’ll take it to another level when going to Spring Mountain,” she said.

Findlay Fiat is situated at 210 Gibson Rd. in the Valley Automall. Spearheaded by general manager John Saksa, the dealership is part of Findlay Automotive founded by the late Pete Findlay, whose umbrella of dealerships has grown to include 32 dealerships in Utah, Oregon, Idaho, Arizona and Nevada.

A 33rd Findlay dealership – Findlay Mazda – is currently under construction just south of Audi Henderson in the Valley Automall.