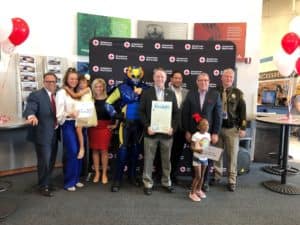 The American Red Cross sounded the alarm June 11 asking for blood donations during its kickoff of the “Missing Types” campaign at Findlay Honda Henderson in the Valley Automall.

You may observe some local businesses whose names are missing the letters A, B, and O. This is to show their support for the Red Cross’ “Missing Types” campaign. Findlay Automotive Group or more appropriately “Findl-y –ut-m-tive Gr-up” and others like Veg-s PBS are helping to bring awareness to this campaign by showing that a few missing letters makes a big difference. Just as when the Red Cross is missing essential blood types it can have a dramatic effect.

Among the executives with stories that touched the attendees were Findlay Automotive Group Chief Financial Officer, Tyler Corder, and Vegas PBS interim director of development and strategic relationships, Clark Dumont.

Corder told the story of his brother, who entered a hospital for heart surgery, only to find out, moments before the procedure was about to begin, that the surgery could not be conducted because insufficient blood was available.

The surgery was rescheduled for a later date at the same hospital. “It was frightening,” Corder said. “Naturally we were worried about his heart ailment. But equally concerning was the mental stress of another round of pre-surgery preparation before the surgery could be completed about a week later.”

Corder, who is immediate past chairman of the board of the Red Cross of Southern Nevada, praised the American Red Cross for all that it does over the years.

“Thank God for the Red Cross, because when something bad happens, they are always there to respond,” Corder said.

Findlay Automotive Group has already conducted 19 blood drives this year and is on pace to help collect 420 units of blood for the Red Cross in 2019.

Dumont, a blood recipient himself, said the need for blood is significant, especially considering that he was diagnosed with Guillain-Barre syndrome, in which the immune system attacks your nervous system. He received blood when he was diagnosed and was cured because of a week-long regimen of intravenous immunoglobulin therapy, a mixture of antibodies.

“I’m not the only one with a need for blood. There are more and they are right here.”

Among the others needing blood and attending the event were 4-year-old Gia, who has sickle cell anemia; 4-year-old Lala O’Bryant, who must receive an eight-hour blood treatment with high doses of IVIG; and Jessica Ruiz, who suffers from severe anemia and is in need of Type O Positive blood.

Corder encouraged other organizations and businesses to hold blood drives to help alleviate the shortage of blood. “Unfortunately, only 3% of the population donates blood yet someone needs blood every 2 seconds.” To find a blood drive near you visit the American Red Cross website at www.RedCrossBlood.org.

Findlay Honda Henderson is located at 933 Auto Show Drive in the Valley Automall. The dealership is part of Findlay Automotive Group founded in 1961 by the late Pete Findlay, whose organization has now grown to include 33 dealerships in six states including Nevada, California, Oregon, Idaho, Utah and Arizona. For more information about Findlay Automotive Group visit www.FindlayAuto.com

Additional information regarding the American Red Cross can be found locally by calling 702-791-3311.