The Chevrolet Colorado has proven popular with employees and customers 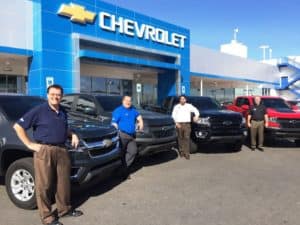 Findlay Chevrolet generated quite the buzz when it ushered in the 2017 Chevrolet Colorado truck into its lineup last year.

And that enthusiasm is contagious as evidenced by the fact that twelve members of the dealership’s staff purchased various Colorado models. Among those who bought Colorados were both the general manager and a lot porter.

With an MSRP of $20,000, the Colorado is surprisingly affordable and when you consider the EPA estimated MPG of 20 city and 26 highway (2WD 2.5L 4cyl), there are good reasons why the 200 horsepower Chevrolet Colorado has proven popular with both the employees and customers of Findlay Chevrolet.

USA Today recently reported that the average new car price has risen to $33,560. Pair that with an increasing demand for trucks and it’s no wonder that the Colorado has been so well received.

General Manager Doug Fleming said “This is a very good-selling pickup which provides excellent power, superb handling and perfect overall amenities, General Motors hit the ball out of the park with this truck which is much easier to park and it actually fits in your garage.”

General Motors has clearly understood that consumers are looking for options in pickup trucks. The Colorado is available with both four cylinder and V-6 engines. The larger engine Colorado with 308 horsepower boasts of the most horsepower in its class. The midsize pickup also includes an available Duramax 2.8 liter turbo diesel engine that offers the best fuel economy of any pickup along with best-in-class towing power and torque.

The Colorado, which has been Motor Trend’s Truck of the Year for two straight years, also has a towing capacity of 7,000 pounds.

Also impressive is the brand new ZR2 model, considered a dominate member of its class; and perfect for off-road enthusiasts. Available in two or four-wheel drive models, the Colorado has its bases covered whether the driver is driving the curves of Red Rock or taking on the challenging winter roads of Southern Utah.

Some other distinctive features regarding the Colorado are projector-beam headlamps, a gunmetal grill and model-specific badging bring a one-of-a-kind appearance; 17-inch dark argent metallic-painted cast-aluminum wheels; a Corner Step rear bumper; and corner hand grips along with car tie-down rings that are available.

Also available are a variety of cab and bed sizes.

Situated at 6800 S. Torrey Pines Dr., in the southwest valley, Findlay Chevrolet is part of Findlay Automotive Group founded in 1961 by the late Pete Findlay, whose son, Cliff, now oversees 31 dealerships in Nevada, Utah, Arizona, Oregon and Idaho. More information regarding the dealership can be found by visiting www.findlaychevrolet.com or by calling 702-982-4000.