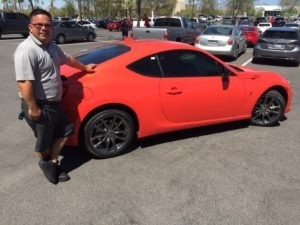 The Toyota 86 has contributed to the incredible success of Findlay Toyota who averaged more than 700 vehicle sales per month in May and June.

A two-door sports car available with automatic or manual transmission brings 200 to 205 horsepower and rear wheel drive, the vehicle is notably powered by a Subaru Boxer engine and has a lightweight body. It’s the result of a team effort from Toyota and Subaru.

The energized Toyota 86 is playing a role in the incredible success of Findlay Toyota, which averaged more than 700 vehicle sales a month in both May and June.

The Toyota 86’s unique body style, chassis and engine combine to deliver an agile, balanced performance rarely seen in a contemporary sports car. It is also highlighted by crisp handling, a low center of gravity and rear-wheel drive with a brilliantly engineered suspension and steering system to create a sports car with intuitive steering.

Dealership sales consultant Ken Kemp, said the 2017 Toyota 86 has proven very successful at the dealership with a wide variety of sales consultants and more importantly customers.      “It’s an affordable two-door sports car with excellent handling,” said Kemp, of the lightweight rocket. “It also has superior gas mileage. The ’17 Toyota 86 with automatic transmission gets an EPA estimated 24 mpg city 32 mpg on the highway.

Kemp said the Toyota 86 handles marvelously on windy roads where its strengths are most notably on display.

“Everyone loves this car,” Kemp said. “Indeed, it’s yet another example of Toyota quality and expertise.”

Kemp said the interior of the Toyota 86 has been a key element to the vehicle’s success. It’s well done with all the latest tech that consumers have come to expect.

“It has a very impressive sports car cockpit,” Kemp explained, “and it is designed to suit the art of skilled performance driving. In addition, it has six airbags and an excellent audio system.”

Toyota’s new 86 has the heart of an athlete and includes a 2.0 liter direct overhead cam, 16-valve four-cylinder engine with variable valve timing and dual exhaust.

Situated in the Valley Automall at 7733 Eastgate Road, Findlay Toyota is headed by general manager John Barr. The dealership is part of Findlay Automotive Group that was founded in 1961 by the late Pete Findlay, whose son, Cliff, now oversees operation of 31 automobile dealerships in Nevada, Arizona, Oregon, Utah and Idaho.

Further information can be found by calling 702-566-2000 or by visiting www.findlaytoyota.com or for a listing of all Findlay locations visit www.findlayauto.com.